Spring in Paris Vintage Feels in Pink and Stripes 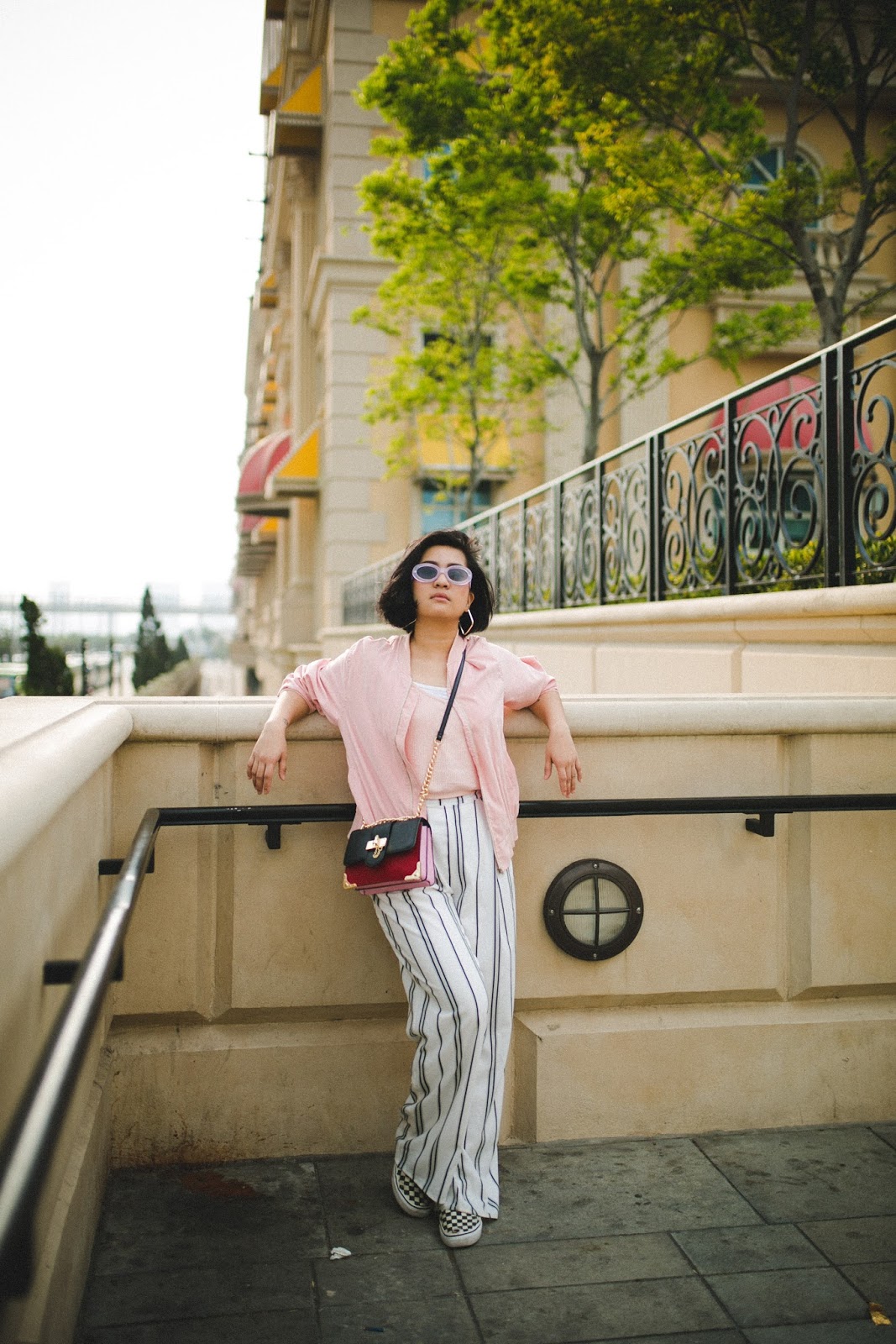 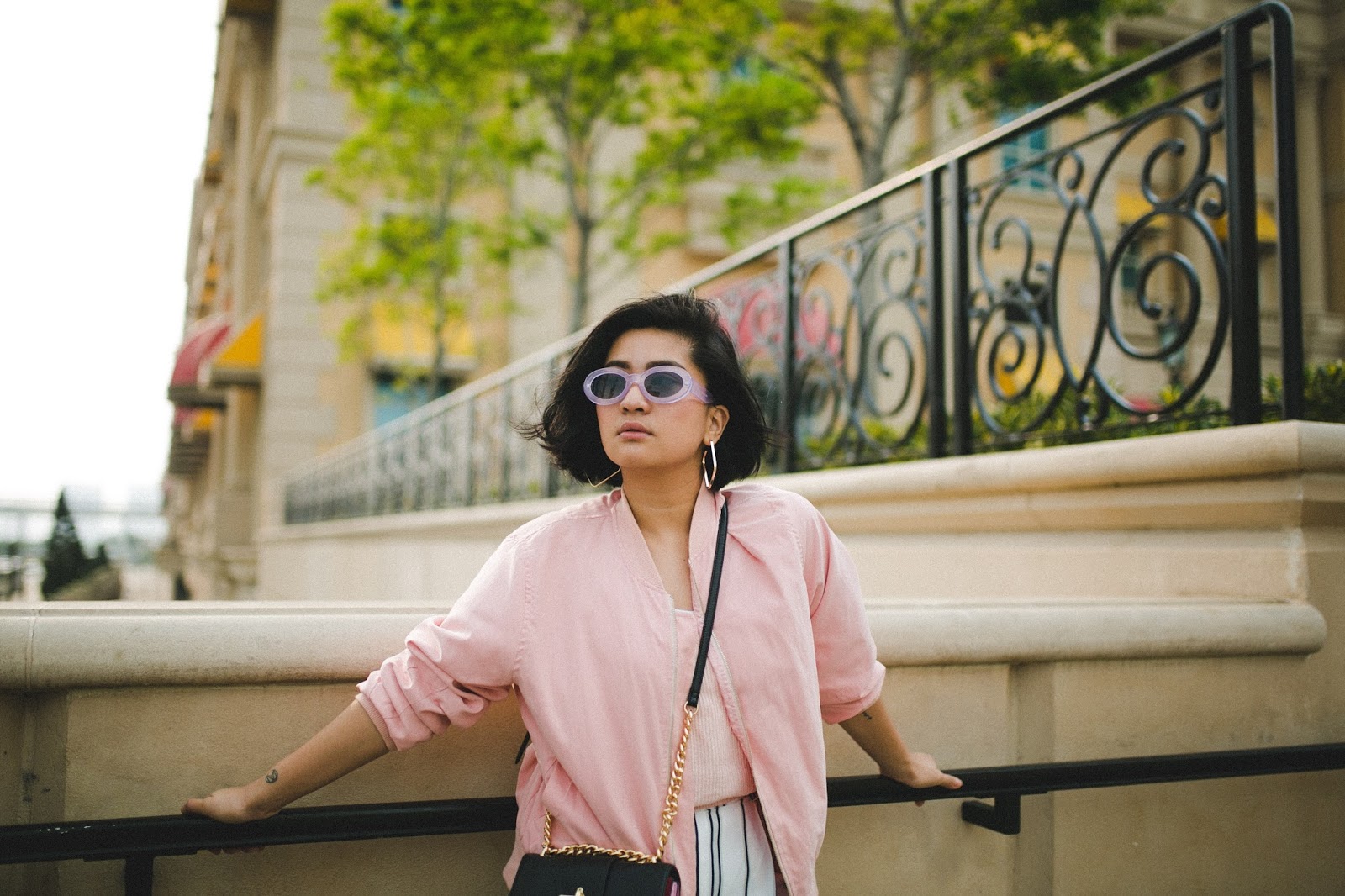 The Parisian is one of the prettiest places in Macau, albeit one of the touristy ones too, the reason why I rarely visit, in addition to it quite inaccessible from where I live. The day these were taken was one of those need-to-find-other-photo-spots moments, away from our usual safe spots so and a perfect opportunity came as an occassion called for us to be there, Penguin having acquired free tickets to La Parisienne Cabaret. So here I am, nearly two years later after having taken my first ever outfit photo in the same area. Don't get me wrong, I've been inside the shopping halls a few times to hunt for gems at Antonia and the occasional dinners at Le Buffet. But other than that, there's really not much reason to go there (I don't mean that in a bad way, if you're in Macau and/or new here, I do recommend paying a visit, it's gorgeous in and out!).

By the way, my March VLOG is up on the youtube channel so if you'd like to sneak a peek and see what I mean about the Parisian's glorious interiors as well as the show we saw, then click here to watch the video. The footages from that day is towards the end so just fast forward to 19:30 if you want to skip the rest of the first bits. But I recommend you to watch the full video anyway so you get to see me let loose with my crazy, gorgeous girlfriends in an unfiltered dinner and karaoke session. 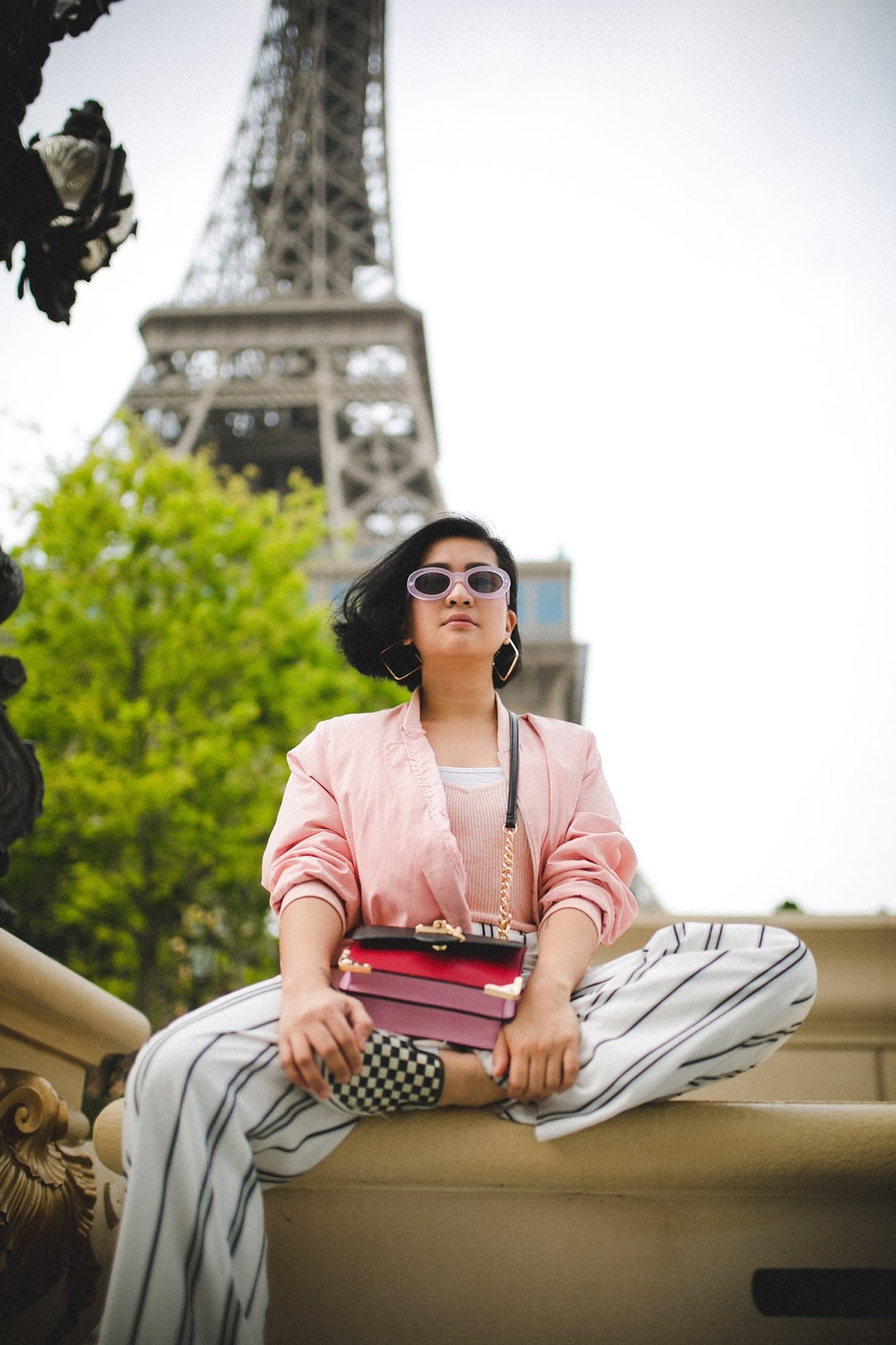 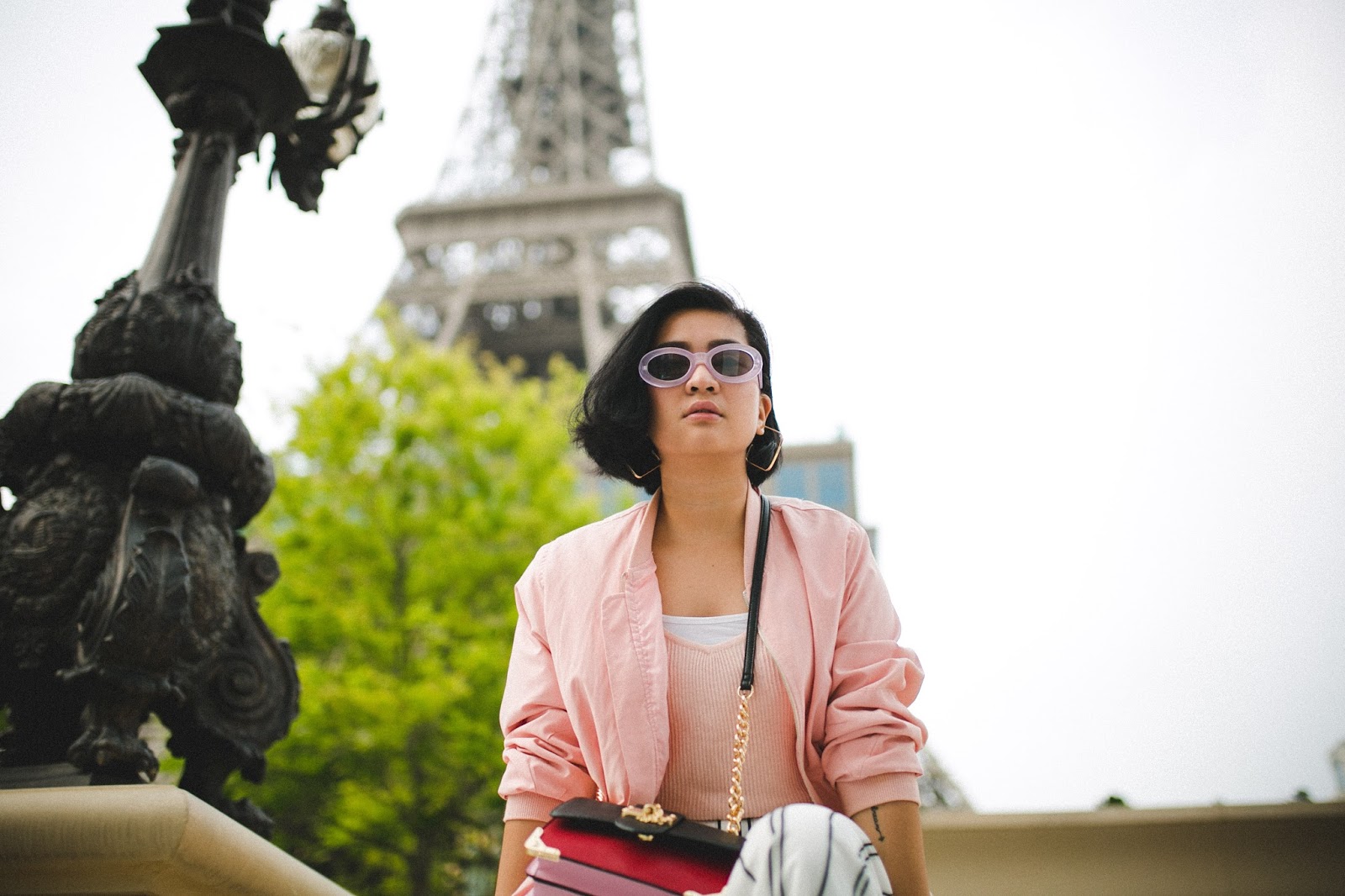 Now, let's talk about this outfit. You know these days, despite not having shopped for clothes for nearly two months now (yes, you read that right!!! Not considering clothes I received as presents of course so...), I'm proud to say I haven't had a moment that I had nothing to wear as I used to always say before. Then I realised it has nothing to do with my closet being miraculously organised for the longest time, but it has to do with me actually having a default go-to outfit that I didn't even realise I had until after reviewing my Instagram photos and the recent lookbook video I did on how to style denim jackets for Spring.. The truth is, whenever I feel lazy to dress up or think about what to wear, I end up pulling out white bottoms, a basic top, and a coloured jacket. Case number one, this post. Case number two, see my previous post. But to really prove my point, just watch the damn lookbook.

So yes, this outfit is a byproduct of one of those days. I sported a light jacket as Spring is upon us and I this pink bomber is just the perfect shade to wear to a romantic setting. I don't mean this day being romantic but I was imagining the real Paris so romantic is the word I used.

I thought the photos could fool a person who's never been to Paris that I actually am in the city of lights, non? Qu’en penses tu? Also, I think I'm getting carried away with all these French things as I'm currently reading novels set in Paris and whenever I read a book, I get transported to where it's set so let me be for just a minute imagining I am really back in Paris eating pain au chocolat and sipping coffee in front of the Eiffel Tower for breakfast.

Okay, now I'll stop before I get on full reminiscing mode. 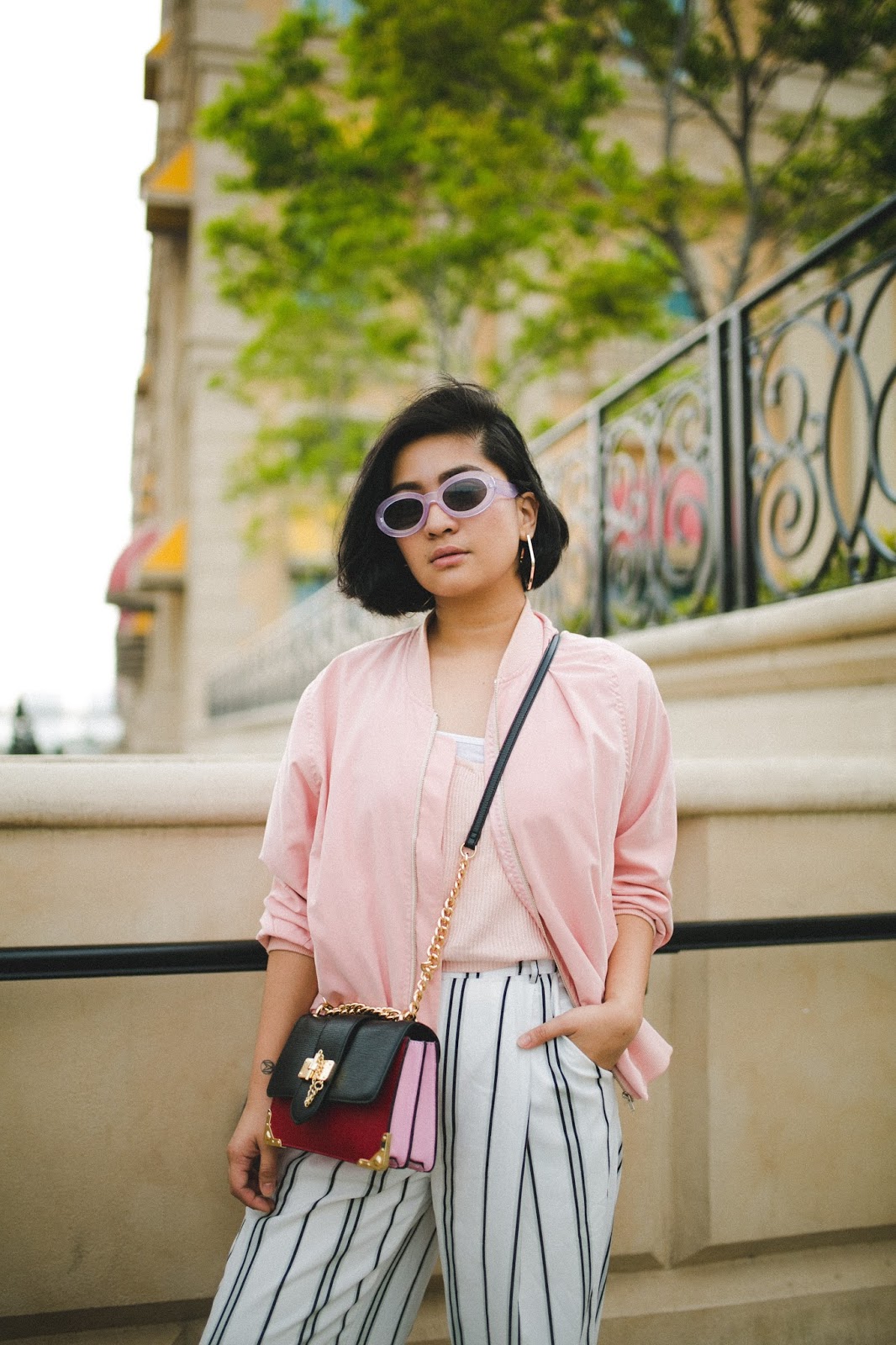 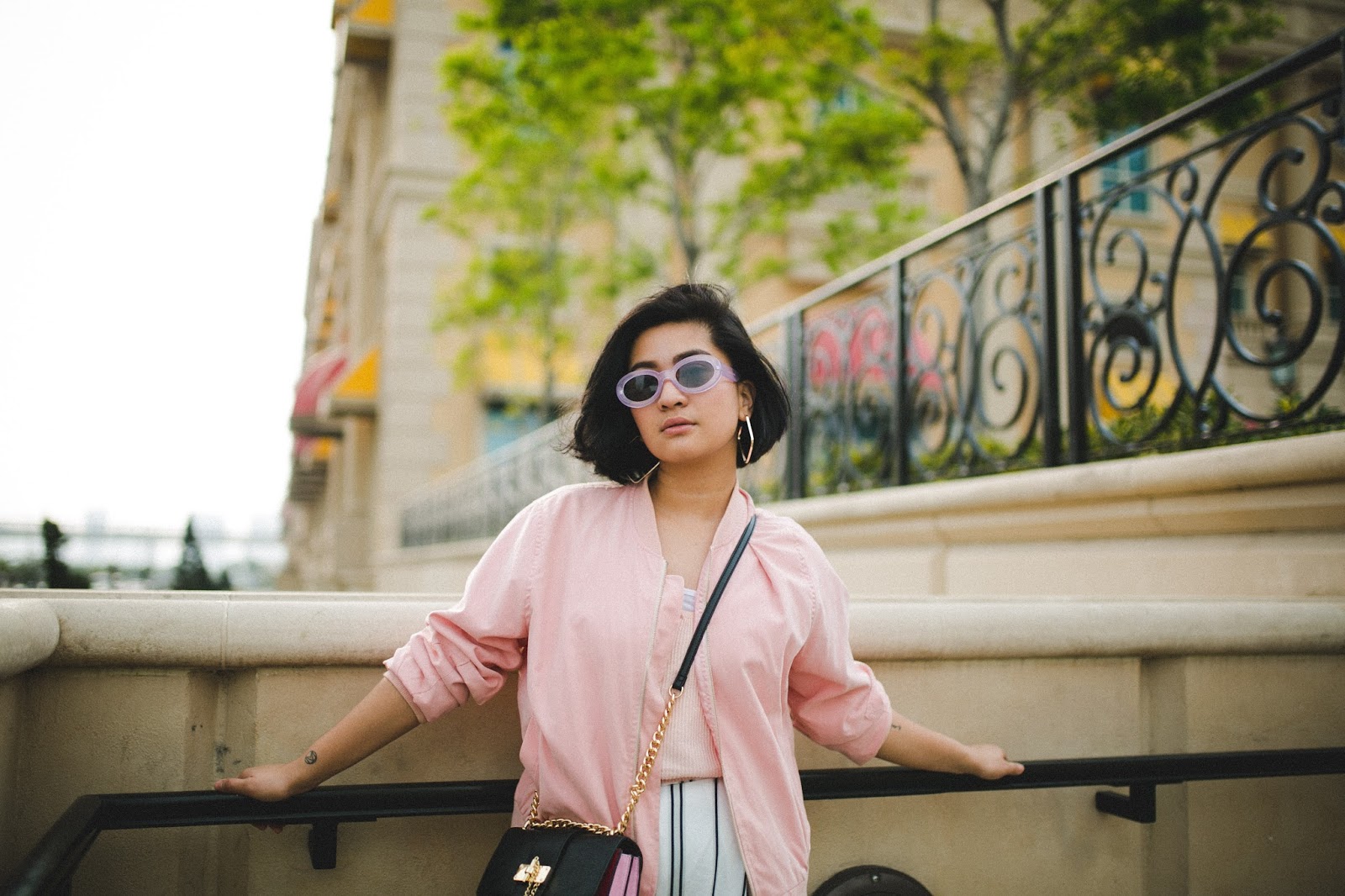 So, it's April and I know I always say this but time really flies so fast!!! What happened in the last three months? A lot, I know, but not enough to consider them eventful. Gosh, I don't know what my problem is with time, really. Sometimes I feel like I'm a race against time but there really isn't a finishing line or an end goal. Ugh. I guess it's just part of getting old and me being too hard on myself for believing in old world standards that are no longer applicable in the modern world like you know, having your shit together, your life figured out, and ready to settle down before 25. Well, I'm past the deadline. I'm just happy that before I forced myself to live up to these standards, I decided to take things at my own phase.

Anyway, all good. April should be good. Here's to hoping and thinking positive! What are your plans this month, talk to me!