Streetwear 101 in Orange and Black 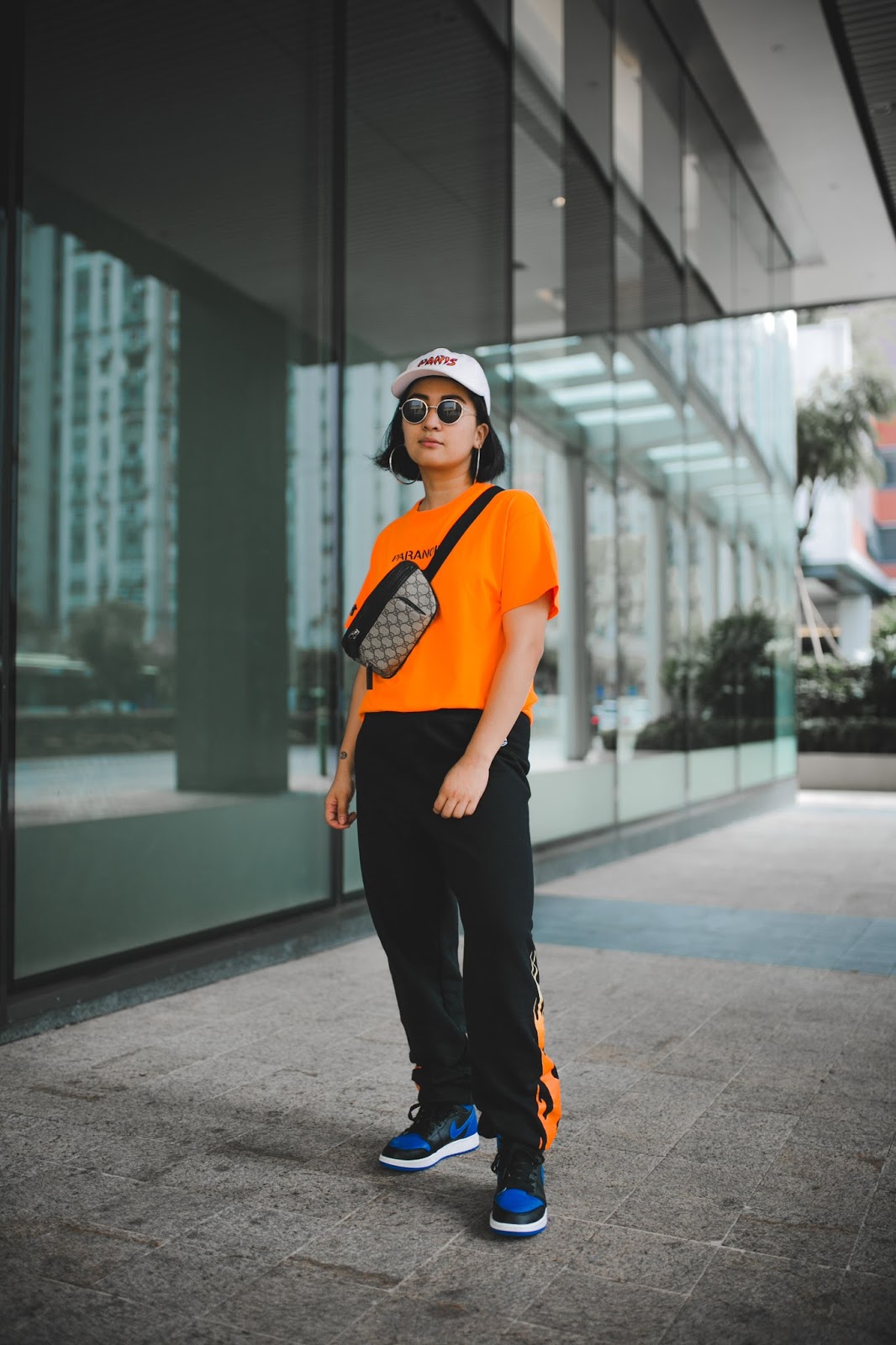 Back to my old tricks in orange and black. I haven't been shopping these past months and it's good because then I get to explore my closet a bit more than I used to and wear old clothes that I acquired (some at a ridiculous cost, mind you, never again!), and yet never used more than twice. This shopping abstinence has made me realise how much clothes I really have and the possible combinations are endless. I just gotta be creative in styling the pieces that I have and that I've been doing. Next outfit entry is proof one but you can take a peep over on my Instagram (@misscarlaviolet) and see for yourself.

Anyway, I know as a style blogger, I should be continuously acquiring new clothes to style and truth be told, that's generally what most people think I do - just keep acquiring and acquiring. Perhaps that's true for others. I'm at a point in life where I'm maturing and my priorities are changing and right now, that doesn't include buying more clothes. But hey, style isn't fashion. And by definition, a style blogger blogs about "style". So hey, whadoyaknow I still fit the bill.

Besides, I think that the pieces I've acquired over the years are really versatile, thankfully. My closet is a capsule wardrobe per se and I can pretty much create outfits for any weather, save for really extreme ones of course. 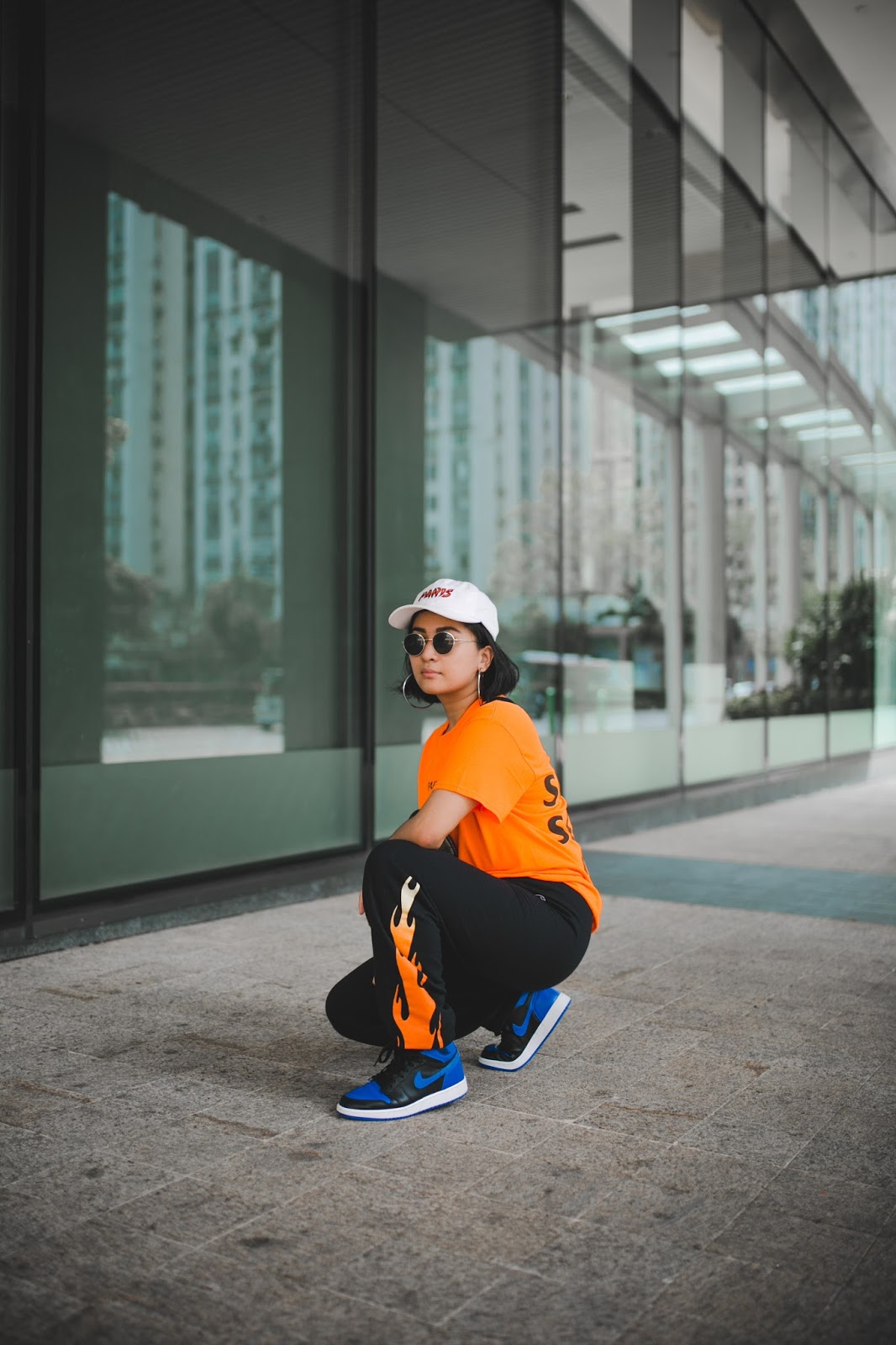 So the pieces that I'm wearing here were once sought-after pieces that are now kind of irrelevant (ASSC I'm looking at you). That's the thing with following fashion trends - one day they're in, the next they're out (yes, like Project Runway). But I think they're still cool enough for me to wear out for a stroll on lazy weekends with Penguin. The orange is a statement colour alright and enough to make this outfit pop. Complimented by the flames on my joggers and the pop of blue in my J's and voila, we have a very outdated but let's call it classic "hypebae" look. I contemplated on typing that word because to be honest, I don't think I have enough streetwear knowledge and not hype enough to be considered one. To those who are confused - a hypebae is the female counterpart of a hypebeast, derived from the "streetwear" community which is NOT the same as "streetstyle". They are two completely different things, though perhaps crossing over at times. But anyway, there's no better way to describe this outfit so let's just stick to that. 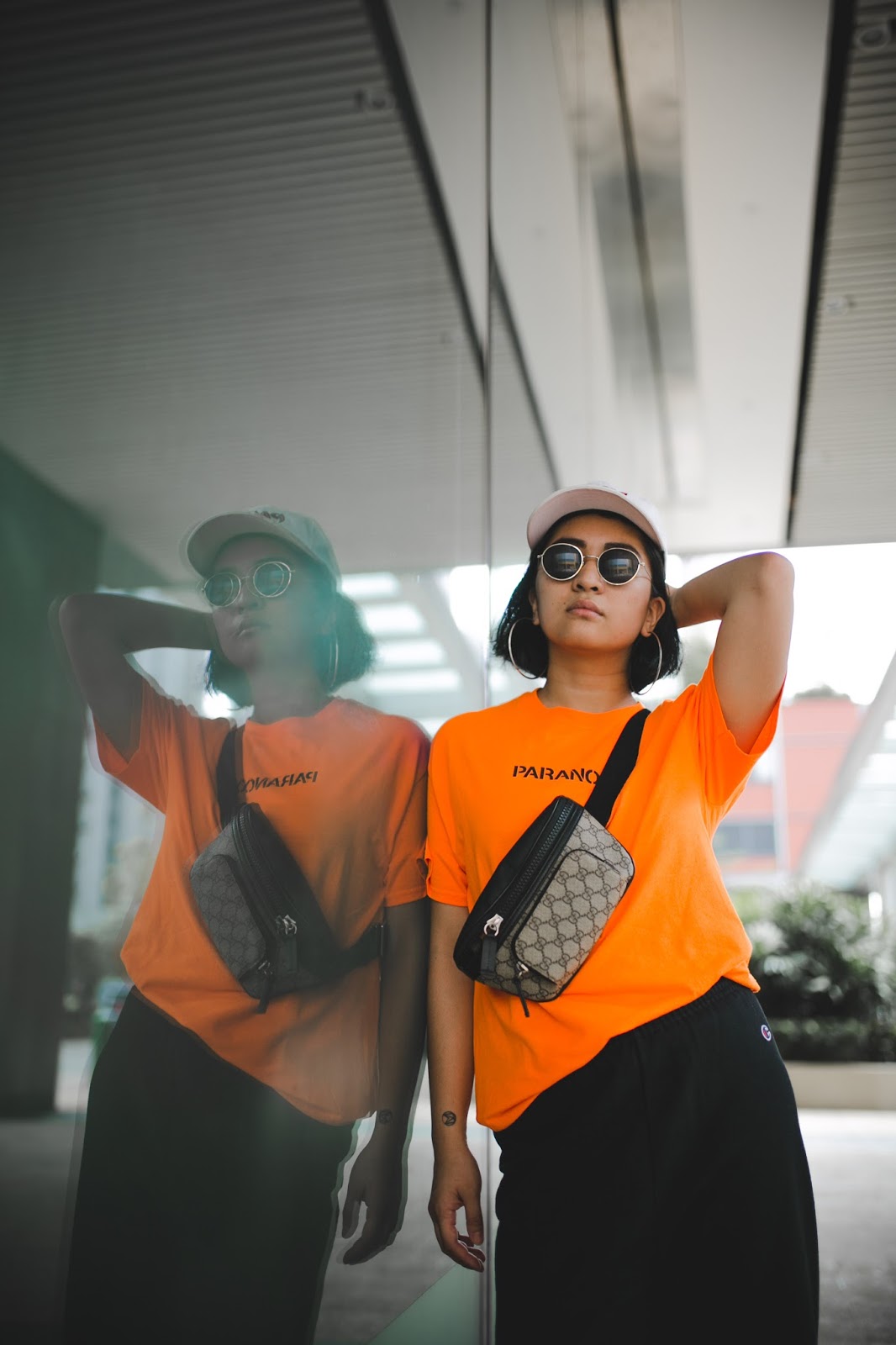 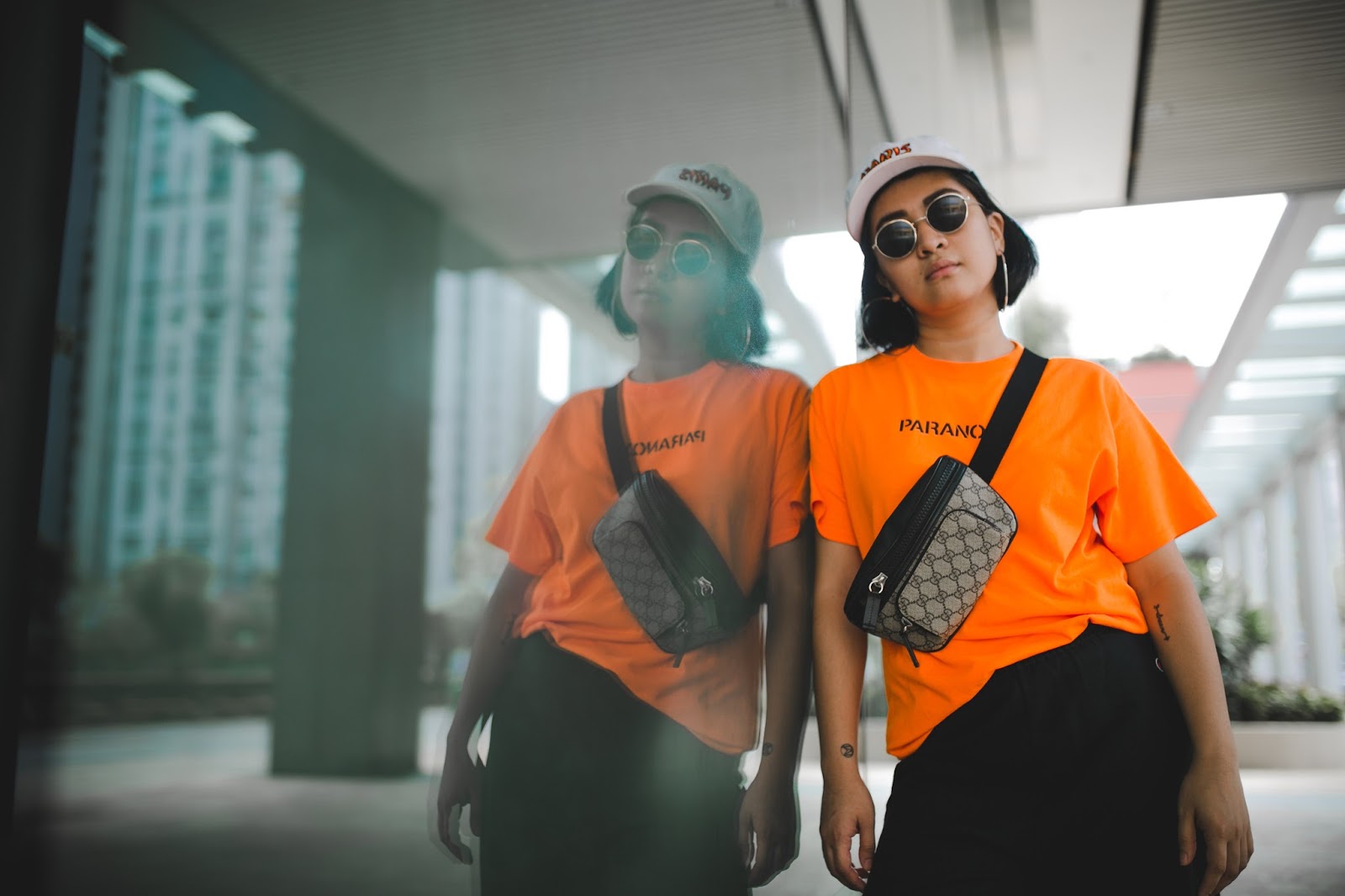 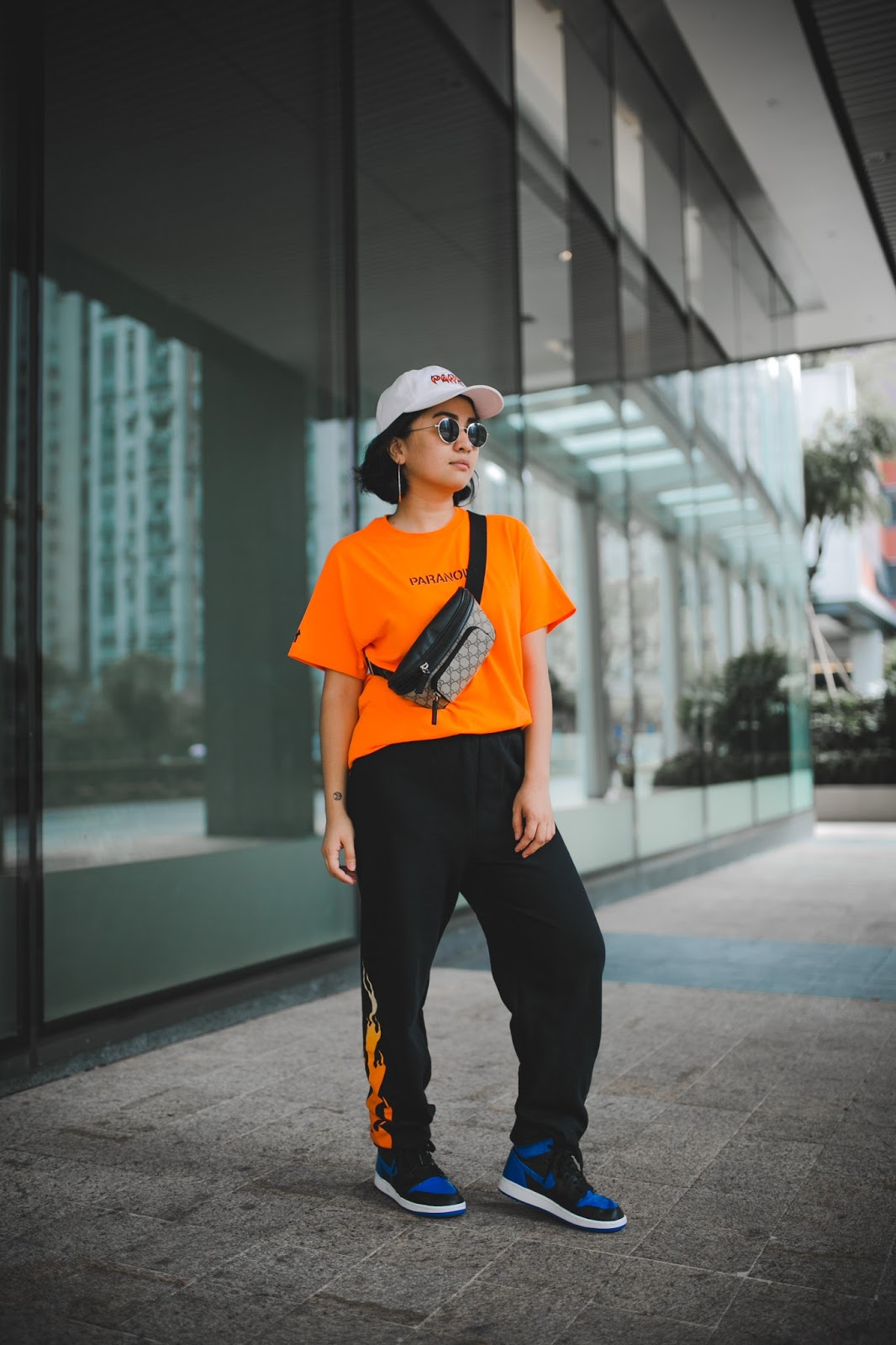 Anyway, what have you guys been up to? I've been having chill days though not necessarily unproductive. I'm working on a lotta different stuff these days - travel planning included and I just can hardly contain my excitement. You'll hear about it soon enough as I keep saying. I just don't want to jinx any plans. But these few days coming up, I'll be a bit busier with things that I need to get done before we leave; fulfilling commitments and last-minute events so today is probably the last chill day before I really get into full holiday mode. So let me enjoy by getting off the internet now and saying bye for now. Talk to ya'll again soon.

P.S. New videos on my youtube channel. Watch if you will. =)