Seoul Foodie | Where and What to Eat in Seoul 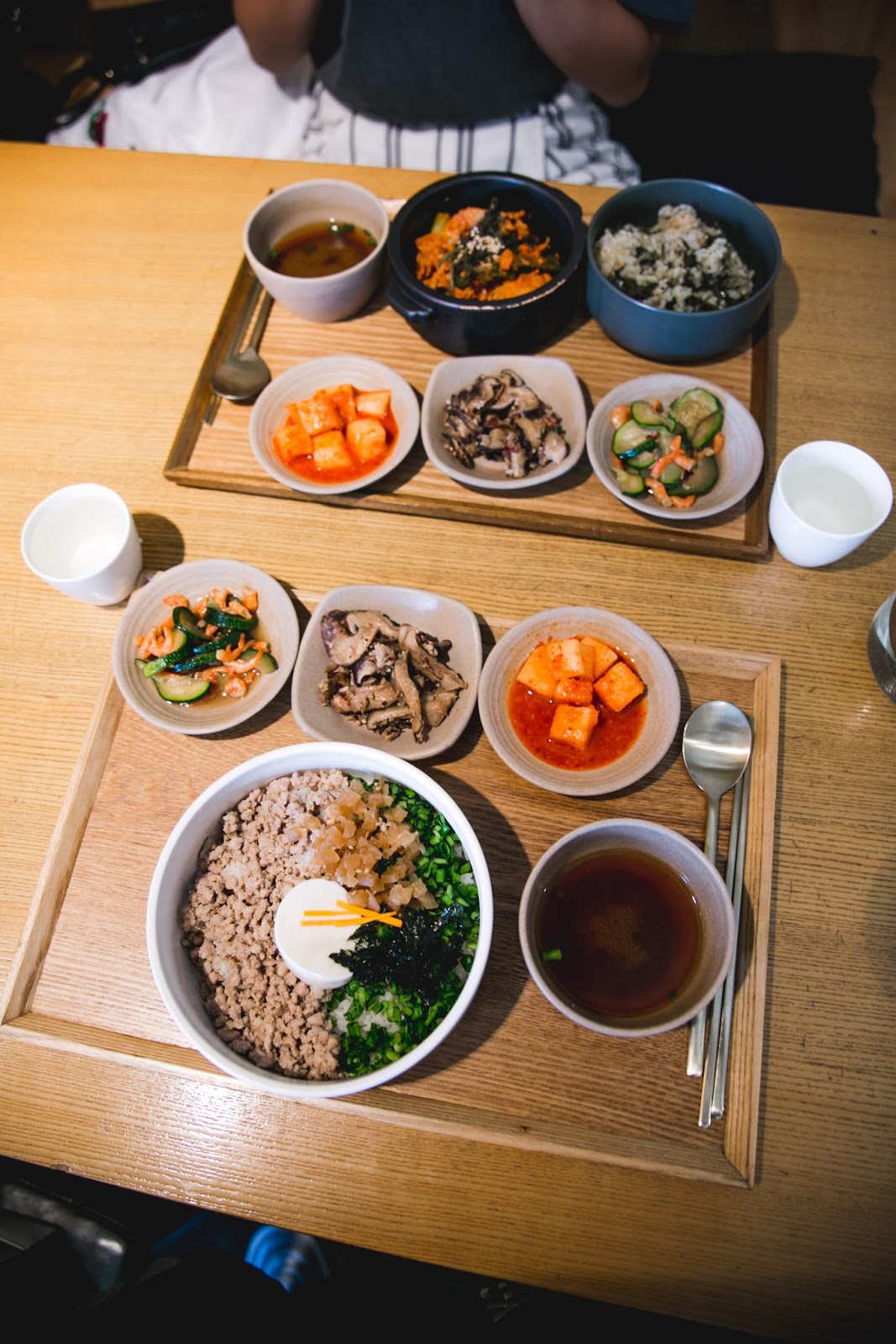 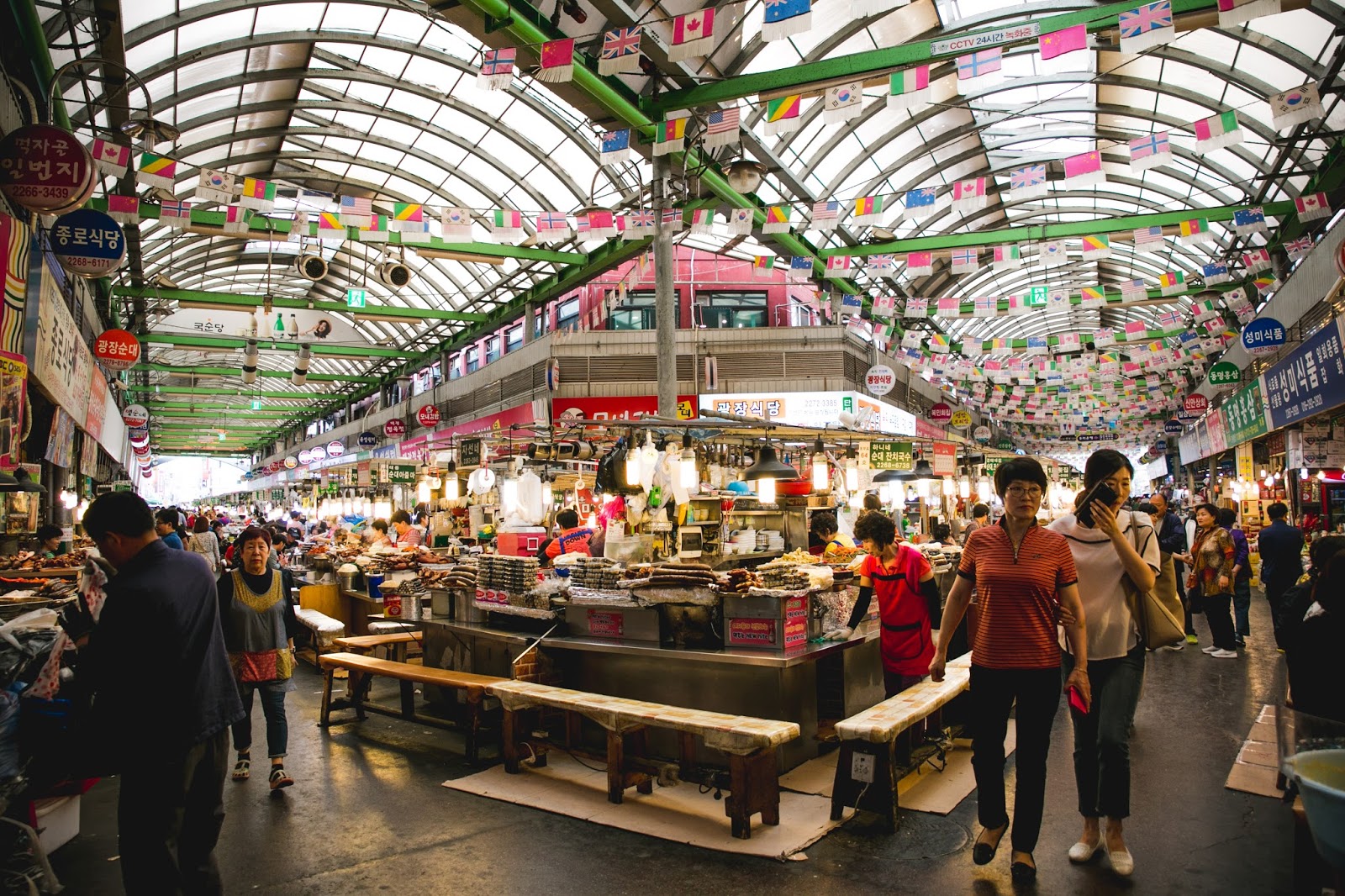 Let's get your mouth watering with this post dedicated to nearly everything that Penguin and I devoured while we were in Seoul. I say nearly everything because we didn't really take photos of every single thing that we ate so this is as much as I can gather.

Day 1. Let's talk about the very first dinner that we had in the city; we just checked into our AirBnb somewhere in Mapo-gu, and after a full day of travelling, all we had in mind was to have a big-ass meal. And that's exactly what we got when we stumbled upon this market-like full of stalls and restaurants that sold nothing else but one type of dish:  Jokbal. For those who don't know, it's pig's trotters cooked with soy sauce and spices and usually steamed or boiled.

Eager to satisfy the inner foodie in the both of us, we sat down in one of the restaurants and ordered a "small" set. Mind you, everything was in Korean and the lady who assisted spoke very little English. The only thing we understood was that the dish came in a set and you can either choose "big" or "small". So we chose.

Apparently the small set isn't so small after all. We were served a huge portion that came with many other things, among them this really delicious vegetable soup in a pot, and another well-known Korean dish called Sundae, a type of sausage made out of pork's blood and glass noodles. I feel like a savage just typing that. But that wasn't the end of our bloody encounter. 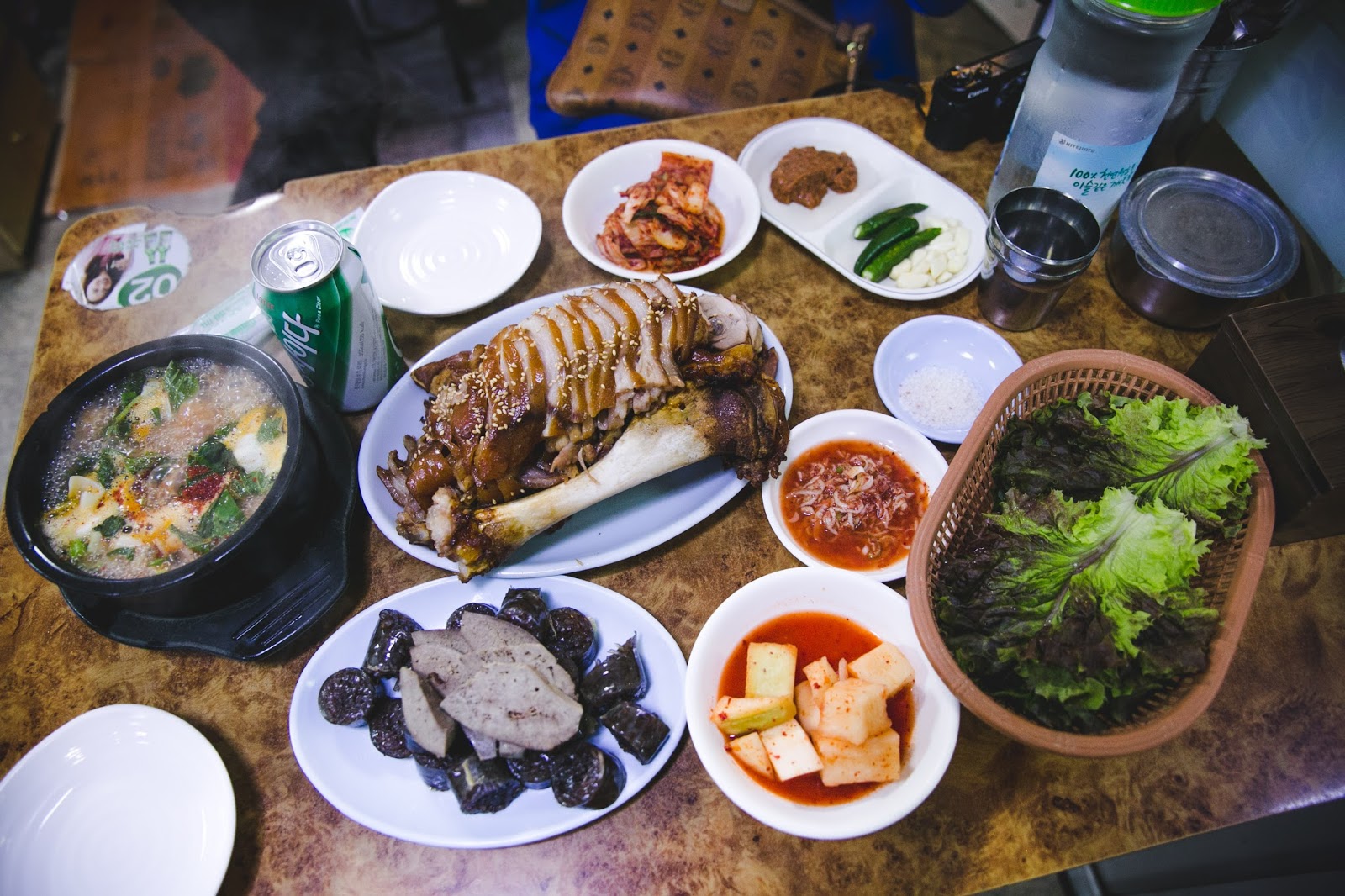 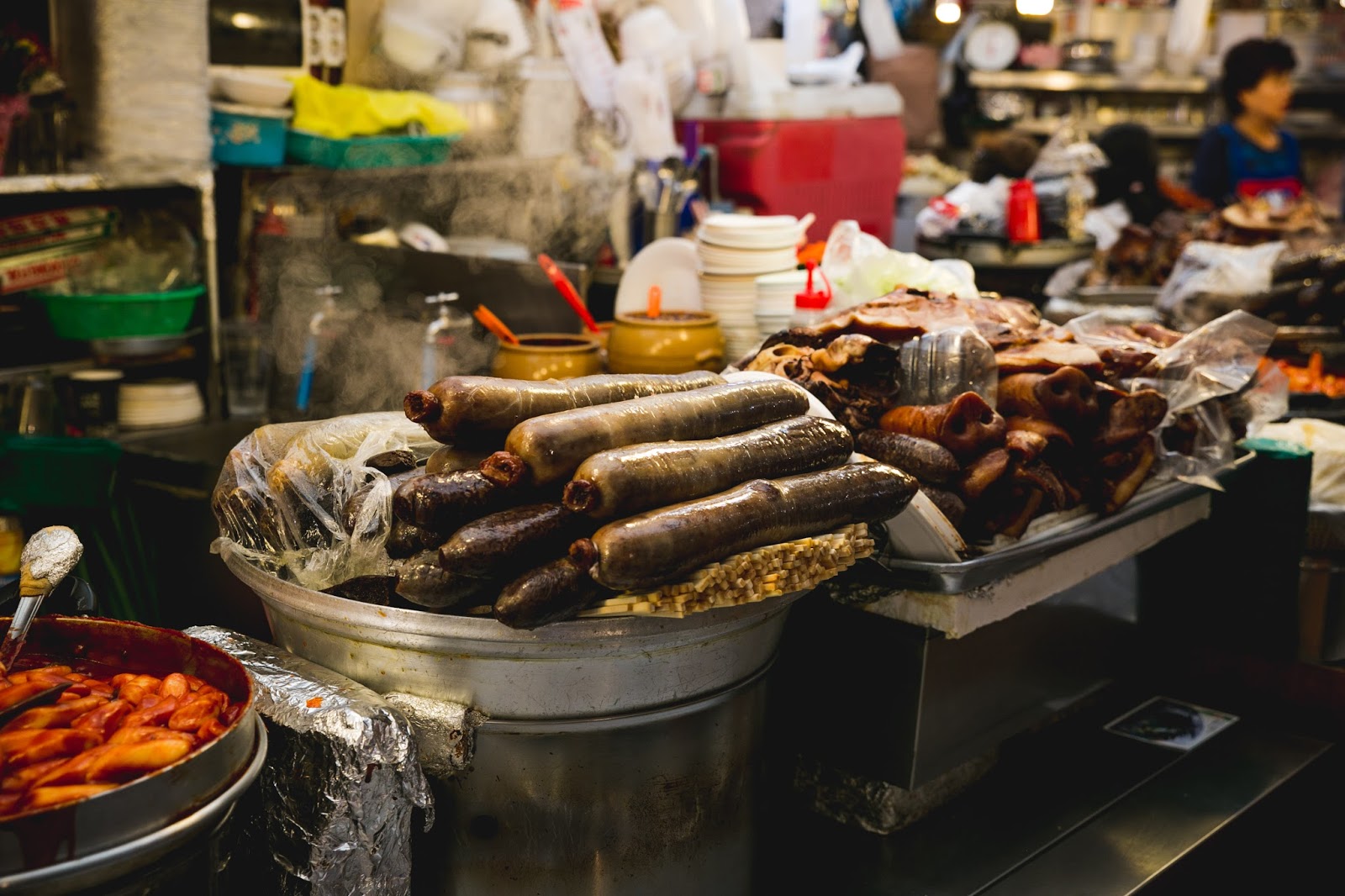 Came our 3rd day and we find ourselves surrounded by the best, or so I hear, Korean dishes you can find in Seoul, at the Gwangjang Market. More Sundaes awaited us.

This is also where we had our very first and only traditional Gimbap throughout our stay. Unlike Sushi, Gimbap takes you in for a surprise because you can't guess what's inside. Sure, you know there's rice, some vegetables, and whatever meat or seafood that's stuffed in there. But one thing you can't be sure is if it'll be spicy, minty, or plain salty specially if you order a variety of it from one of the stalls - they won't tell you what's in it and you only find out when you take a bite. 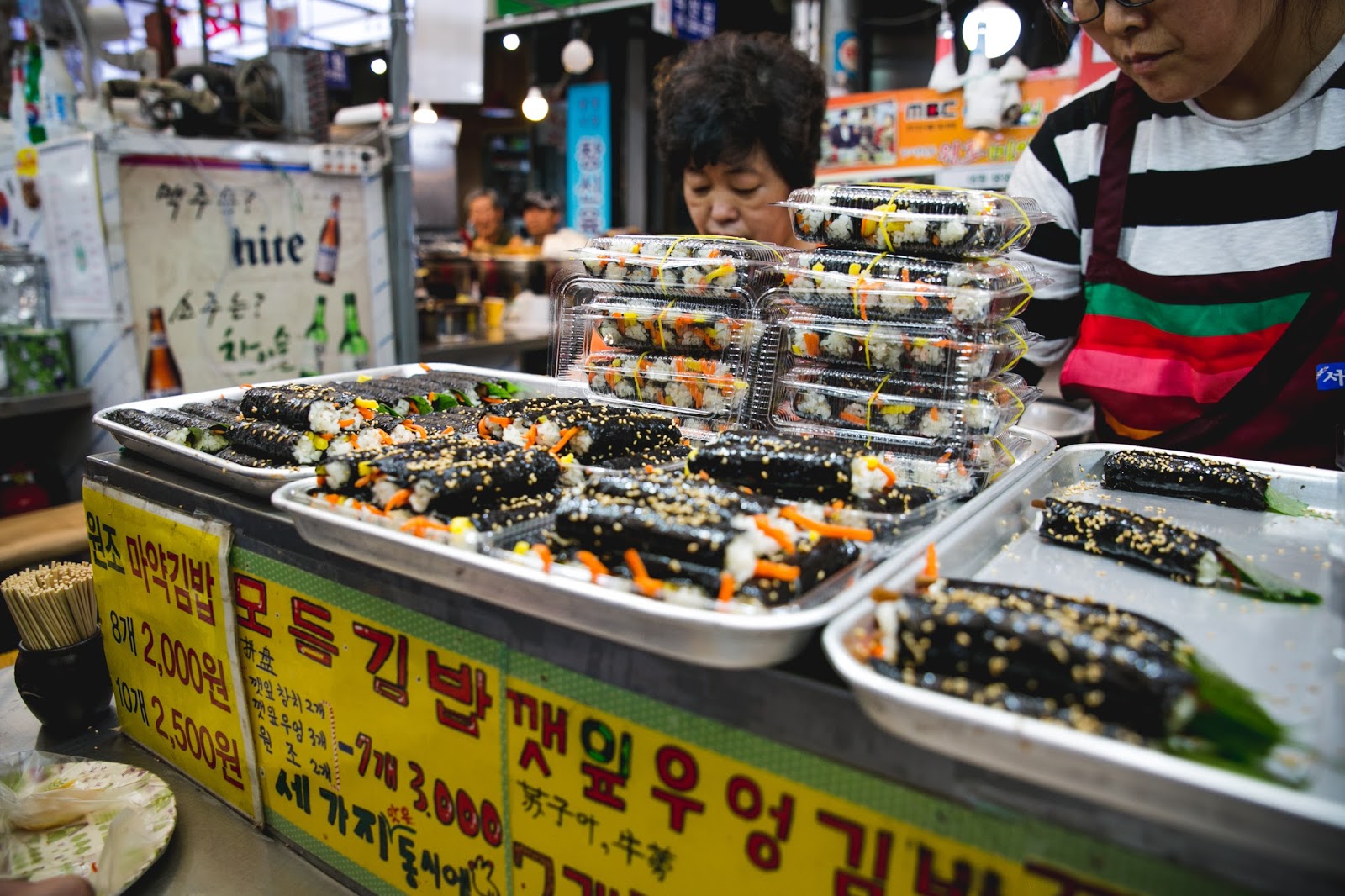 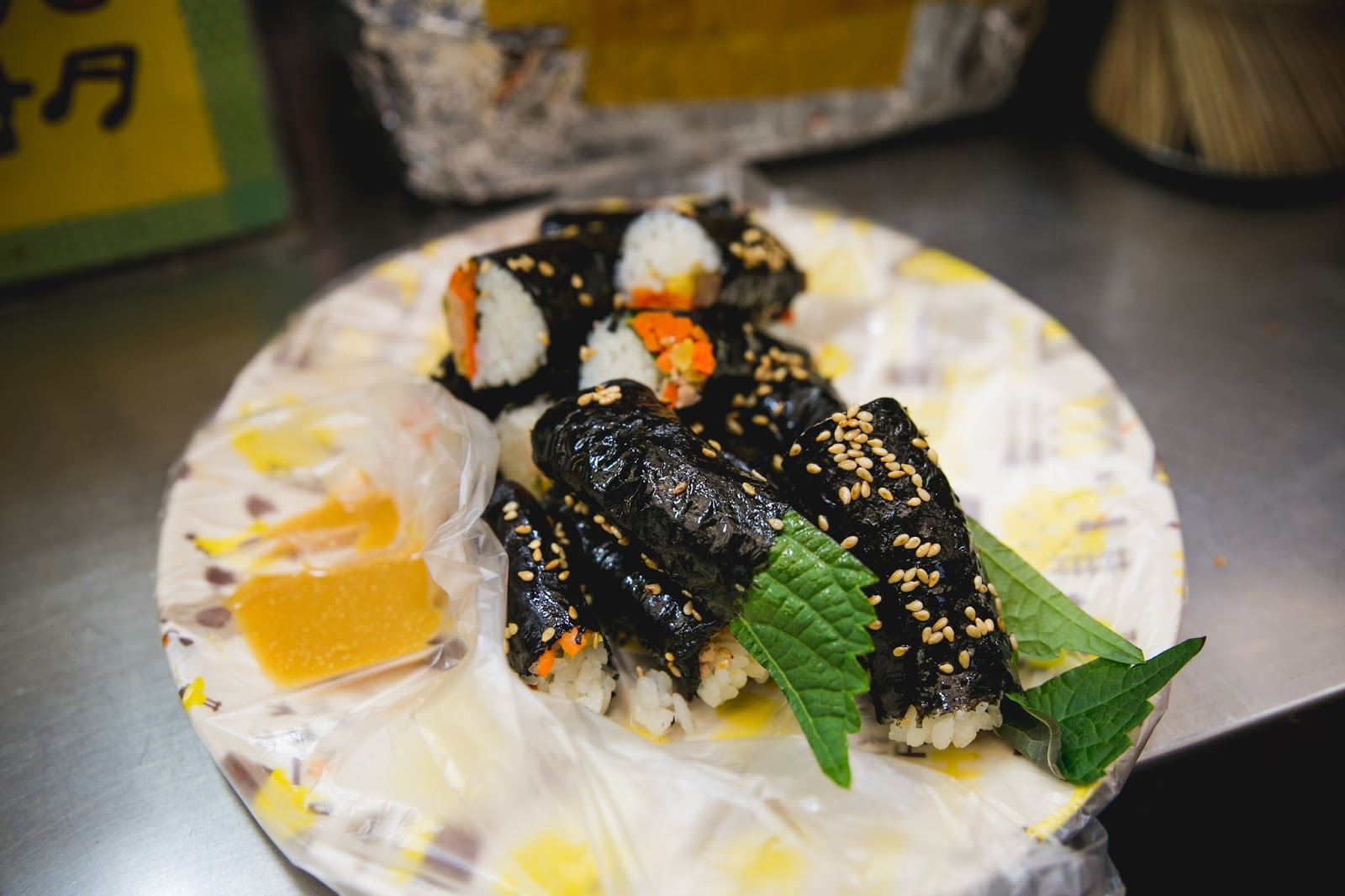 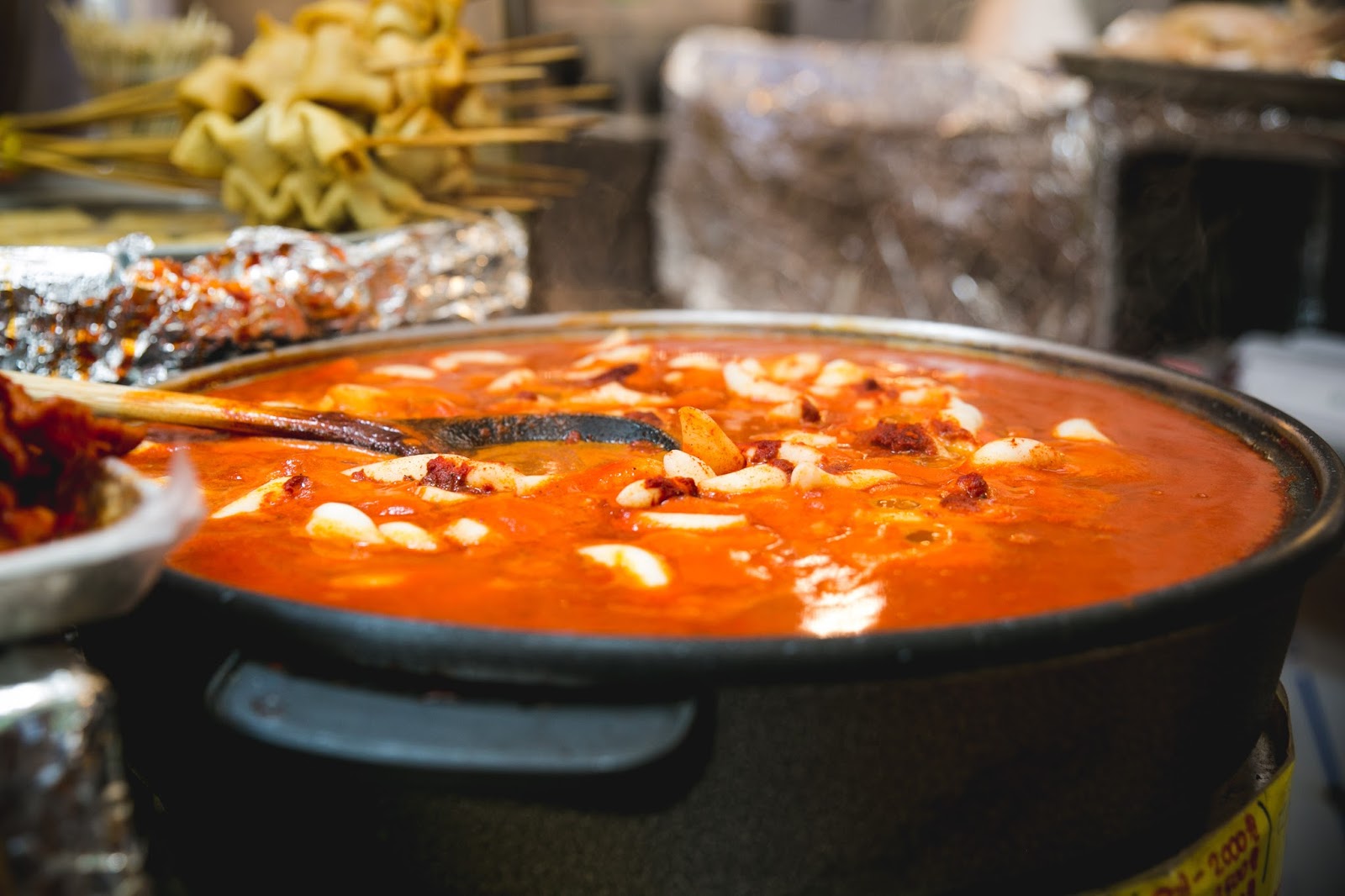 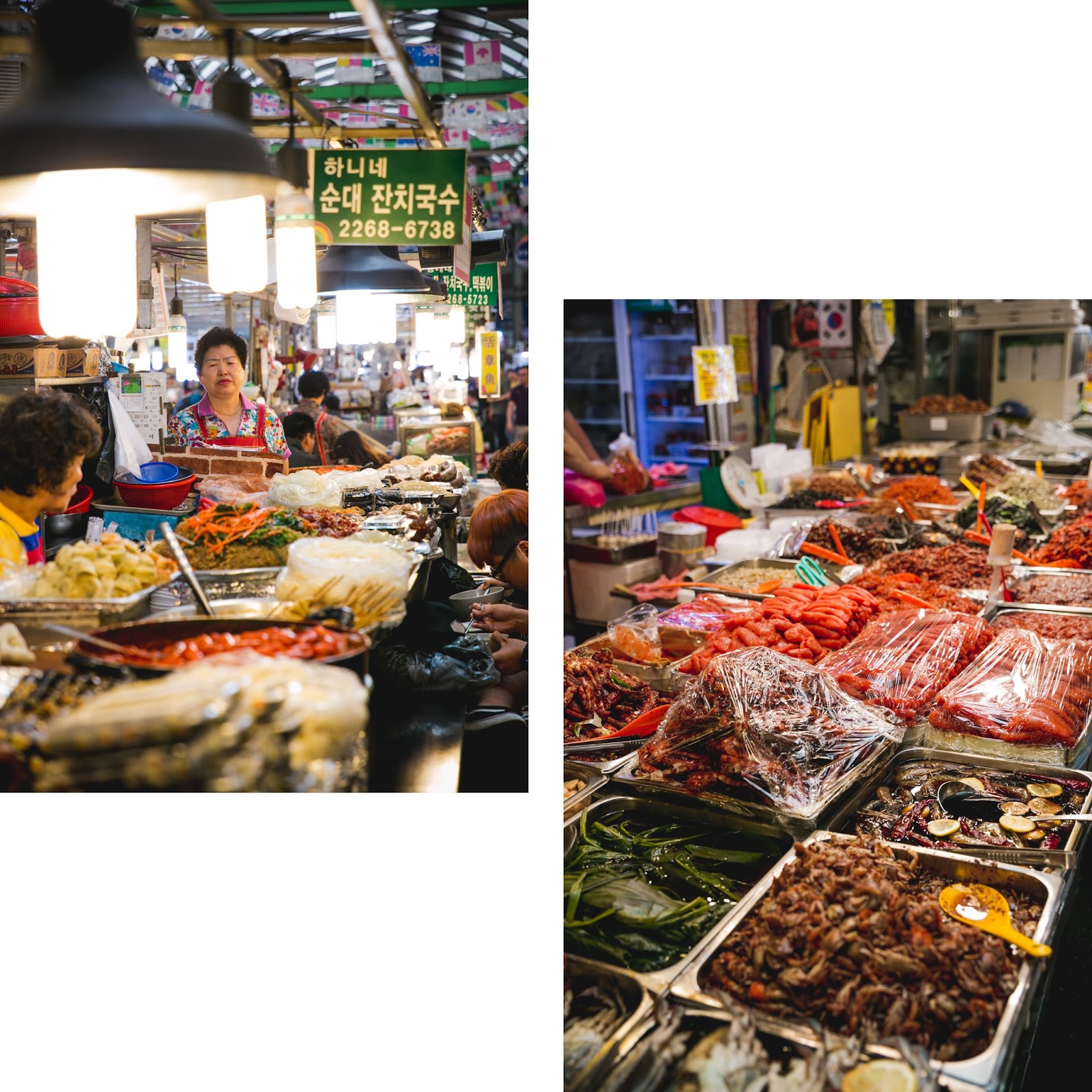 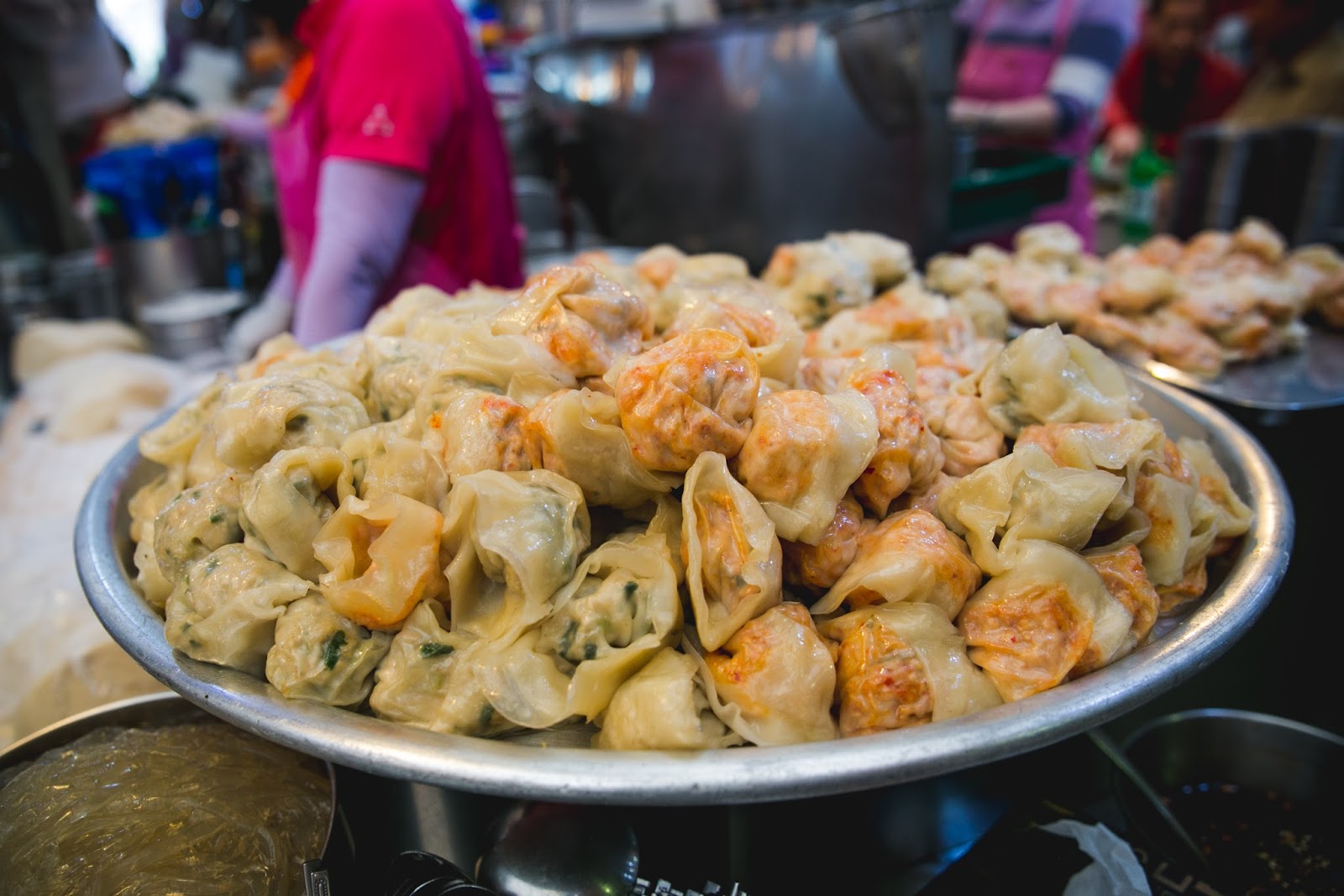 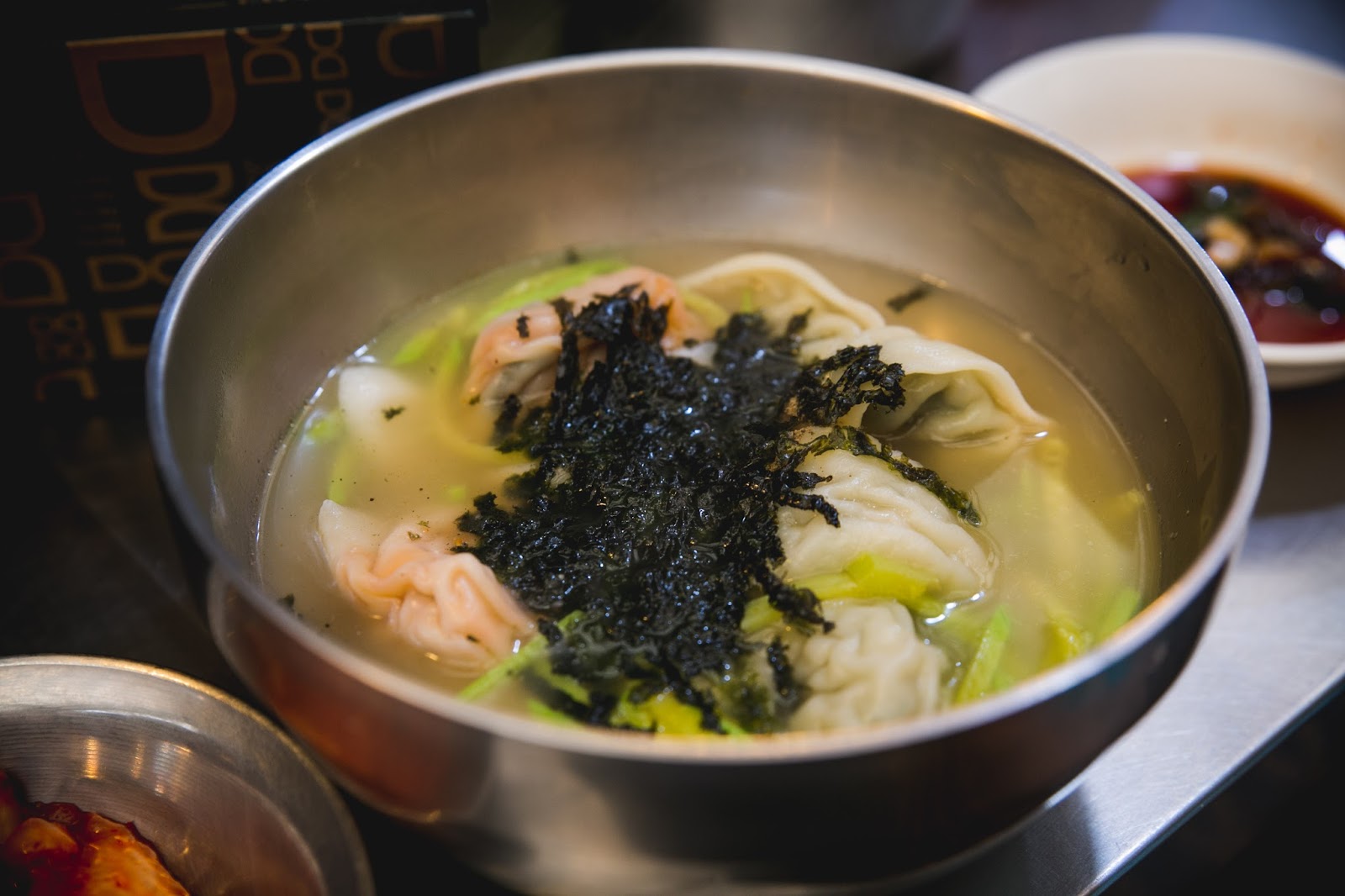 Post Gimbap, we had dumplings that's served in a soup, like noodles. They can come with noodles as you prefer but since we planned on trying out as many variety of food as we can that day, Penguin and I opted to have the dumplings without noodles because that would have made us really full and our tummies swollen.

But the dumplings - they were bomb. Well, for me at least because I love shrimp. And I love how big they were, the kind that you won't be able to fit in your mouth in one bite. After devouring that whole bowl, I already felt that my stomach was full. But nope, still had a lot to try. 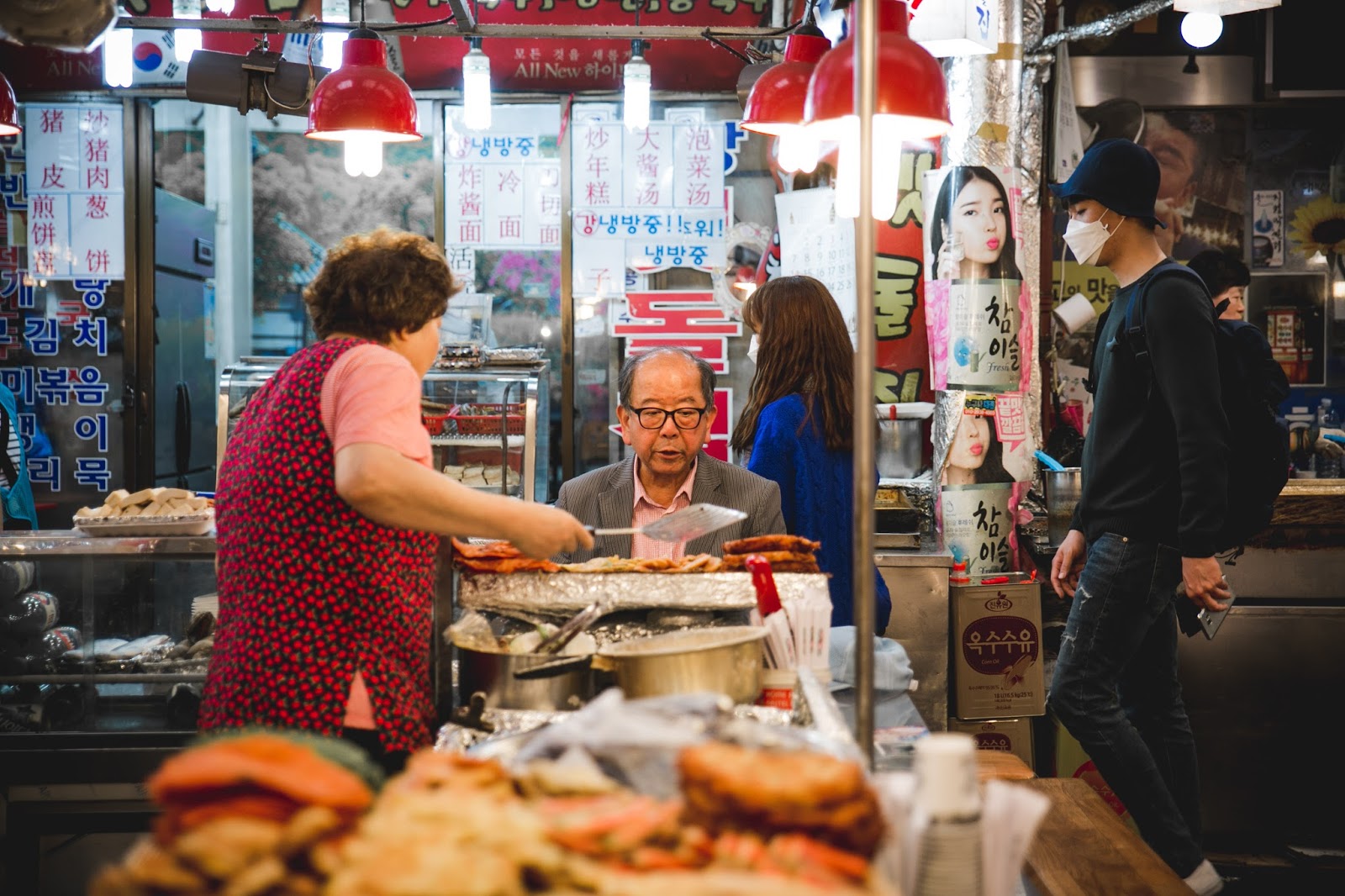 And so we proceeded. Next up on our list were two things that I'm pretty sure not a lot of people would be up for. But they're well-known in Korea and that's as local and authentic as we can get them for so why not? can you guess what they were?

To be quite honest, I wasn't into the idea of eating a live octopus at first. I just couldn't imagine swallowing a moving tentacle. But there we were looking at the little octopuses in one of the stalls that had them in a small rectangular aquarium, and the old lady from behind the stall grabbed one of the octopus nonchalantly and started waiving it in front of us, enticing us. As if that looked enticing. I was laughing nervously, unsure whether I should sit at the makeshift table next to stall where she was calling us to sit, or pretend that I didn't understand a word she was saying (which I really didn't), and walk away. But for some reason, Penguin and I went and sat at the table. Before we know it, the old lady was chopping the live octopus into little, chew-able pieces, in front of our very eyes, all the while it was moving and I can only imagine begging for its dear life.

Once she was done, take note that the chopped bits were still moving, she seasoned them with something spicy, topped with some  chopped cabbage, added more spice, and voila, served us with a raw dish ready to eat. She gave us some seaweed to wrap them with, and a bowl of soup to drown them with. And because the lady didn't have any other customers but us, she really made it a point to feed us. And I mean that literally because she kept feeding Penguin, shoving food into his mouth with her own hands. I had to tease him that he probably reminded her of her grandson. It was hilarious.

Frankly and quite surprisingly, I liked the live octopus. I think that if you're a sashimi kind of person, this is something that you'd fancy too. If not for the fact that the thing was live and is still moving even while we were already eating it, the whole experience wouldn't be or seem so frightening. 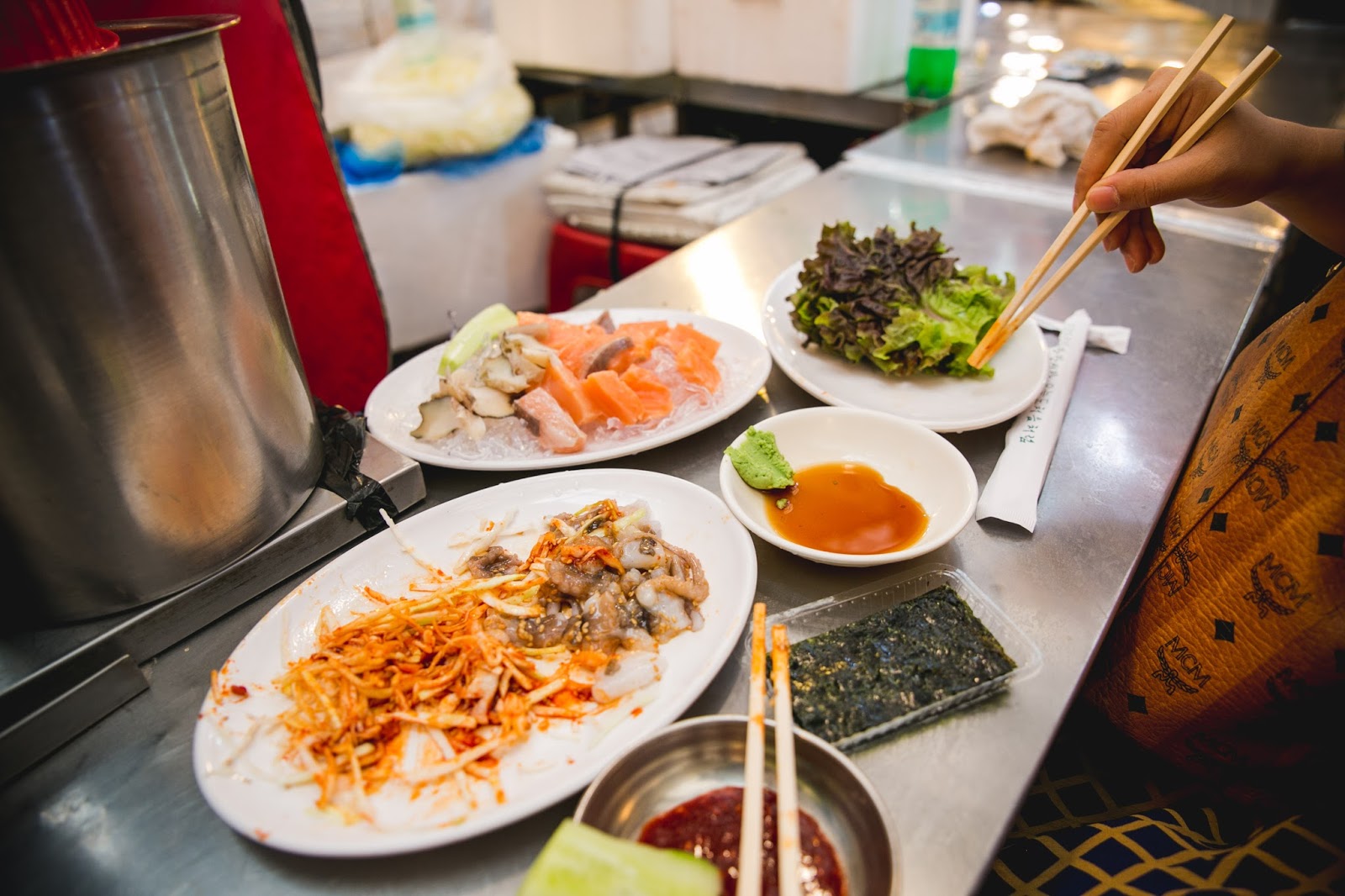 And then we're onto another raw dish.

That wasn't the first time I've tried raw beef, actually. When I went to Jeju for work last year, I had my first and I would say the best raw everything meal in my entire life, and I wanted to have that again in Seoul. Sadly, we couldn't find a restaurant just like that one I went to in Jeju, so we settled for this one which only had the raw beef, also known as Yukhoe. We were full after all, so I guess just having Penguin taste it isn't a bad idea.

Yukhoe is similar to the French's steak tartare but I find that Yukhoe is much tastier. I prefer eating this with raw bibimbap or some other rice dish, but since we had way too much to eat already, we had it as is with just a bowl of soup to drown it with. 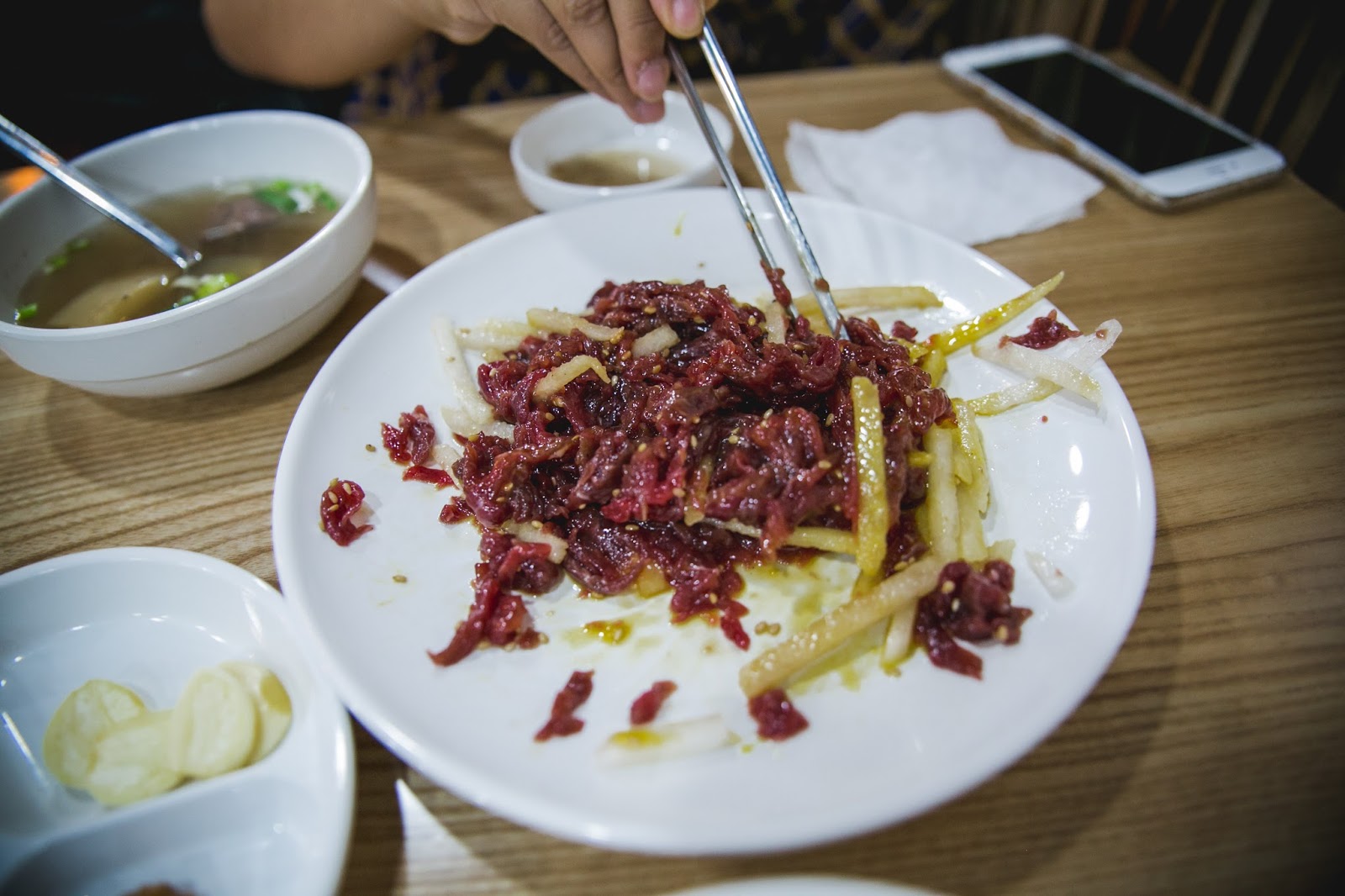 Now our visit to Gwangjang Market took place only in a day. For the rest of the trip, there's a few other places that we went to worth mentioning. Let's begin with "Meat-ing".

When I think about Korean food, there's usually 2 things that come to mind: Korean BBQ and Korean Fried Chicken. The former is more popular where I'm from and usually overpriced too, so much so that we reserve dining out at Korean BBQ restaurants for special occasions. So when Penguin found an all-you-can-eat Korean BBQ restaurant in Seoul for only KRW 13,000, we knew we had to go. Twice. And we did.

The most interesting part about this buffet is that you pick out raw meat. I mean literally raw, straight from the freezer or from the various trays of meat with different marinades. They have 'em in spicy marinade, in soy sauce, etc, etc. I try to avoid meat as much as I can but not during our trip. There's just too much meat to eat in Seoul!

"Meat-ting" is located in Hongdae in case you're wondering. There's another option that we wanted to try out but unfortunately we couldn't locate it, the restaurant is called "Hi Meat". If you guys find it somehow, let me know and if I ever go back to Seoul, I'll definitely try that too. 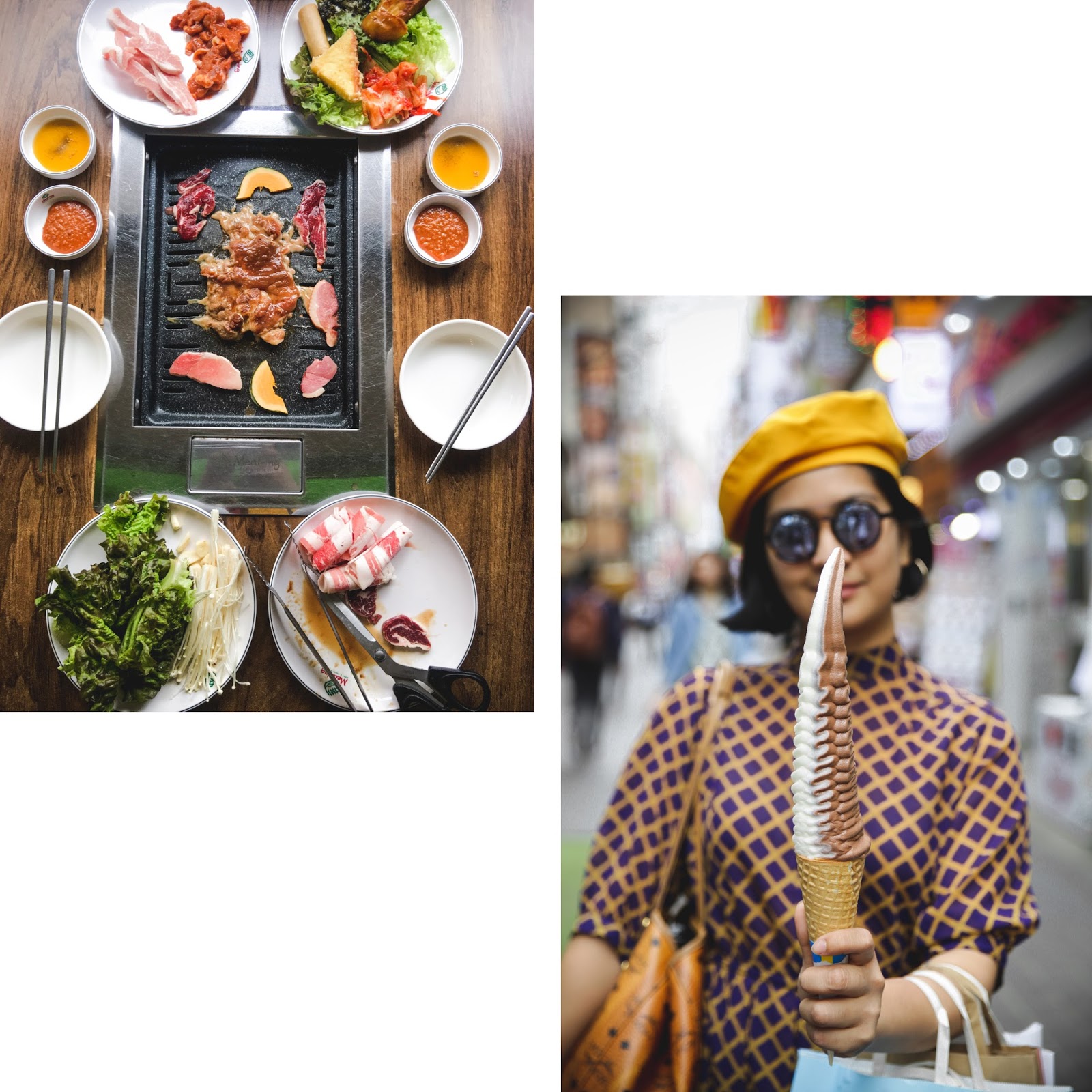 And then of course the very one place that I can't, shouldn't, and wouldn't miss in this list is the street food at Myeongdong. Every person that I know and has been to Seoul would know and tell about this one dilemma: That when you go to Myeongdong at night, you wouldn't know whether to shop first or to check out the food stalls first. Seriously, that place is like shopping + street food heaven.

As soon as we saw the first food stall, Penguin put away his camera as we readied ourselves to eat our way out of the city. That's the very reason why, surprise, I don't have much photos to share with you guys because we were so busy checking out the food, the shopping, and everything else that was happening around us, that we didn't even bother taking photos.  That's how bustling and distracting Myeongdong can get and easily swallow you.

Food-wise, of course we had to try some of the well-known ones including that tall-ass two-flavored ice-cream  (more of a sherbet, actually); the deep-fried sausage wrapped in cut-out potato; more shrimp for me; and some other deep-fried stuff that I can't even remember anymore without the photos. I just remember that everything was scrumptious. 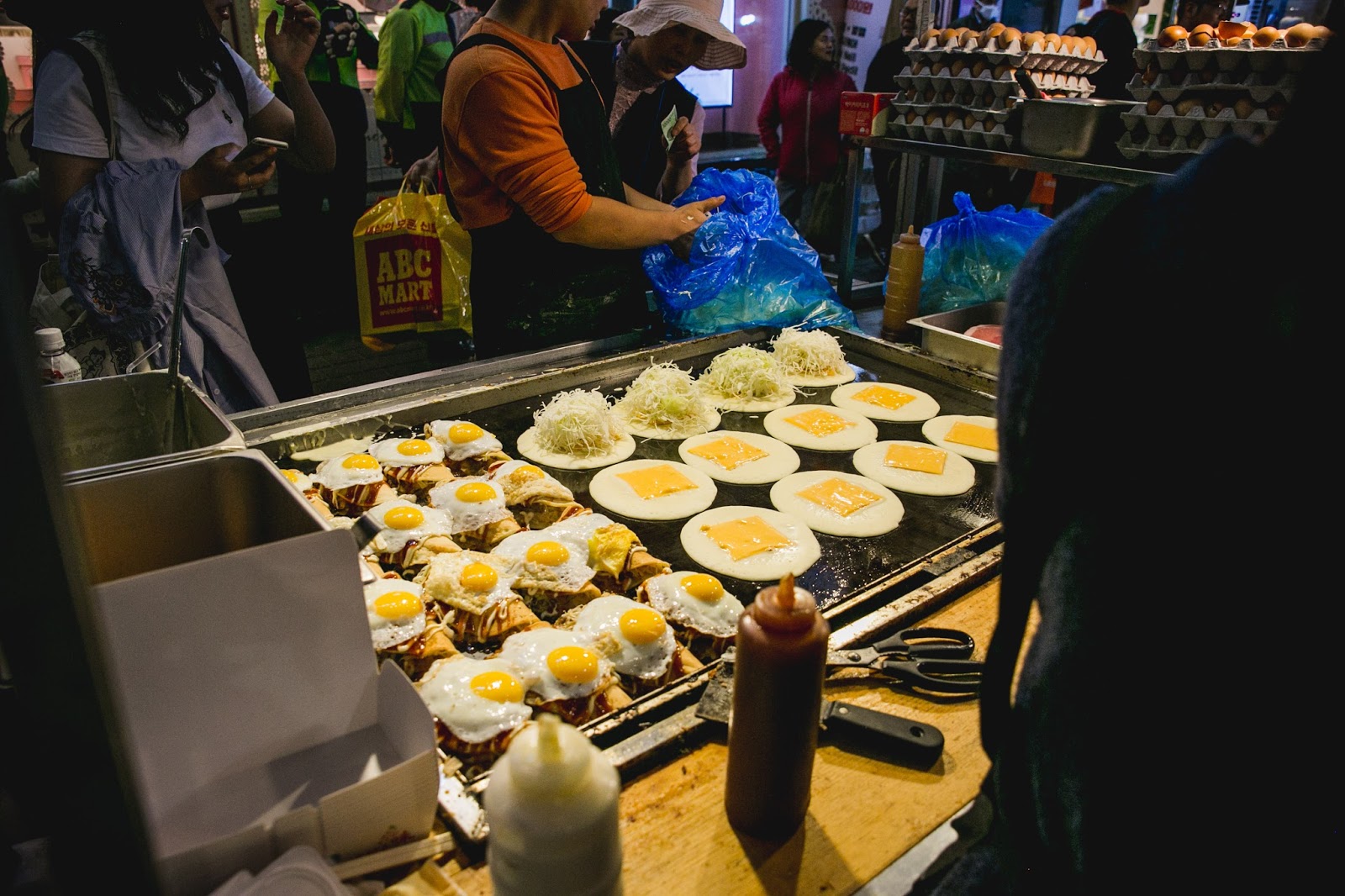 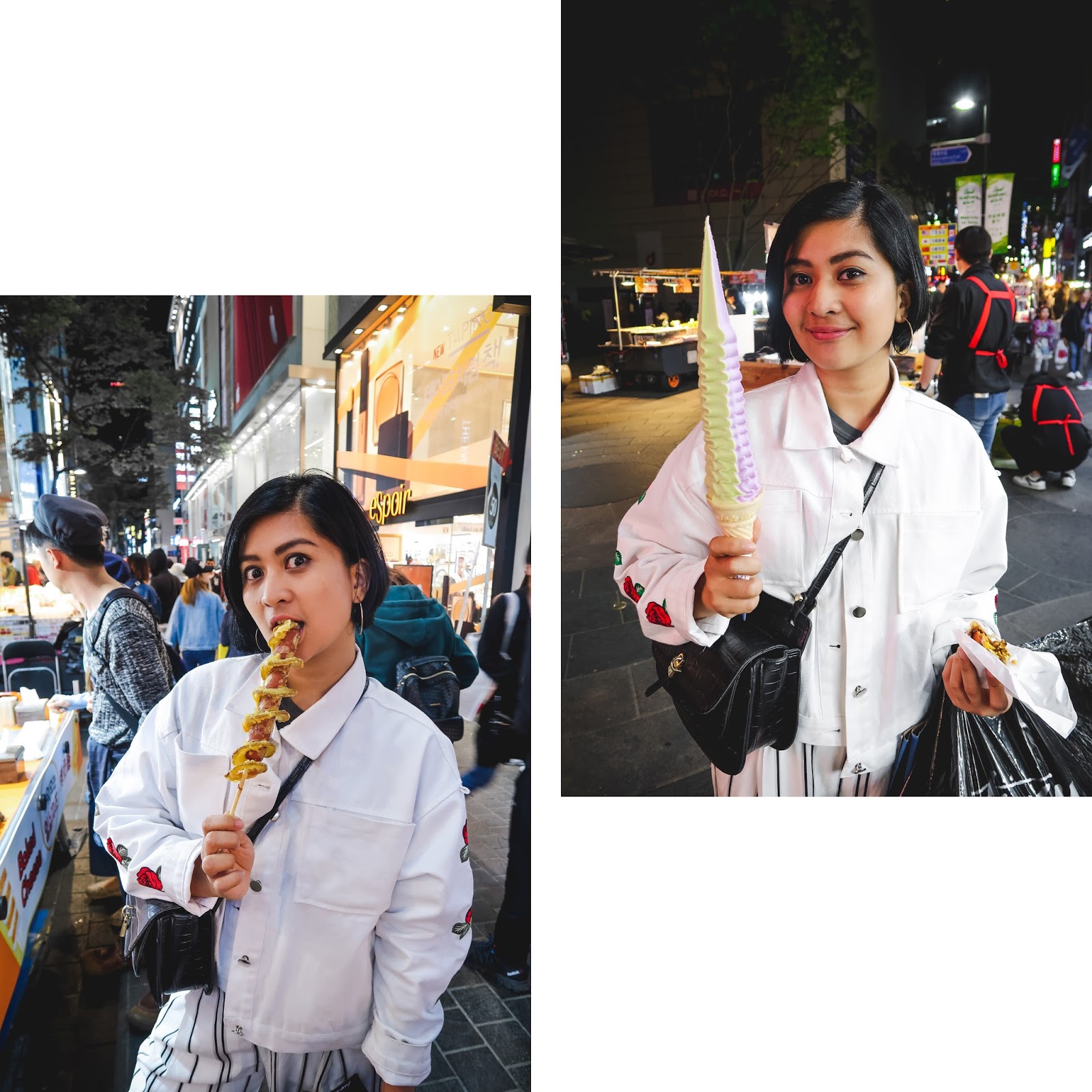 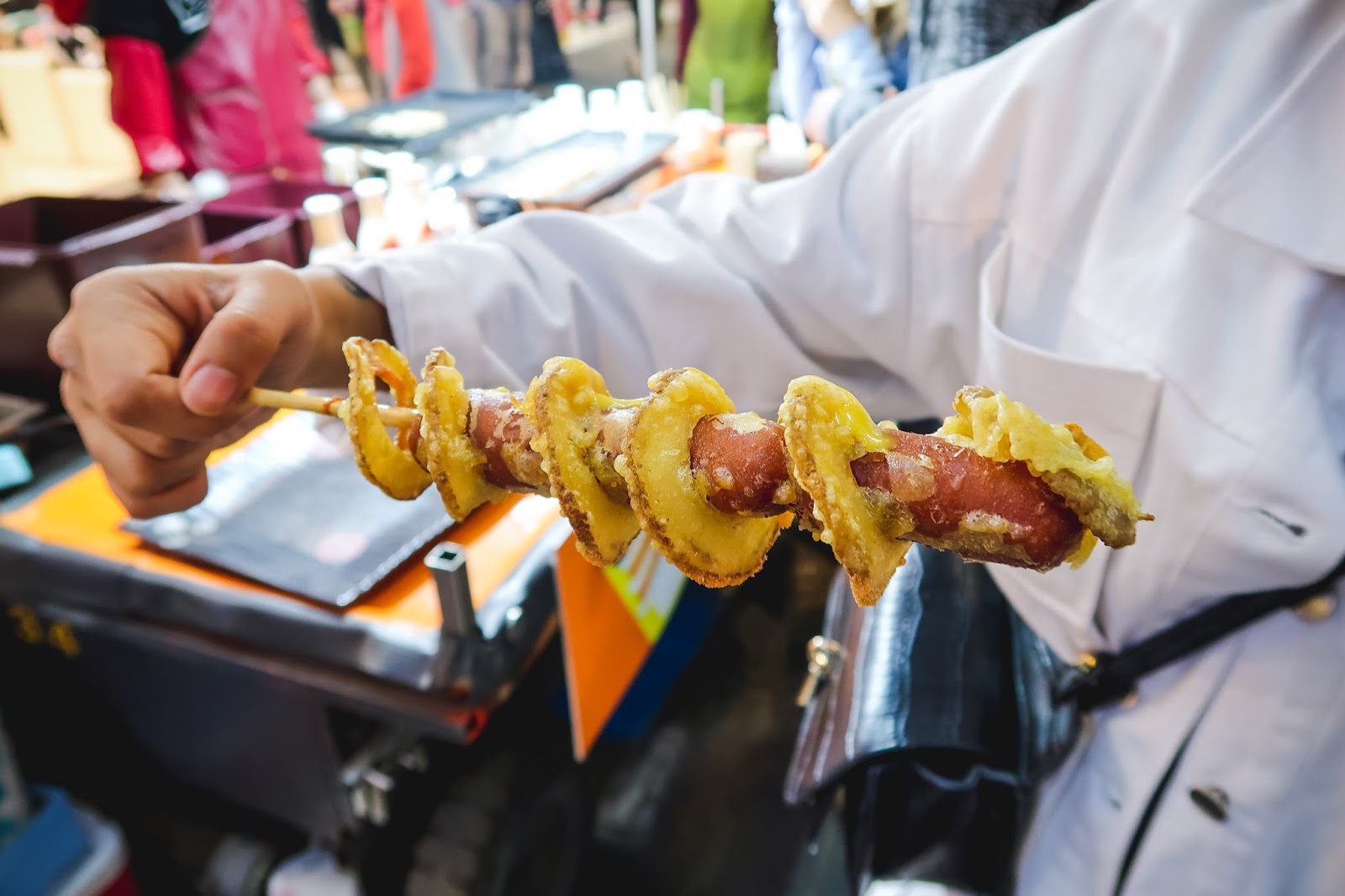 On our last night, we went to Itaewon to chill out a little and grab a few drinks. This is where we had the platter below; not really one of the good ones we had during the whole trip but I loved that the place was so chill; they had beanbags instead of chairs and low tabled so you pretty much sit on the floor while drinking; beach vibes. I just loved it. 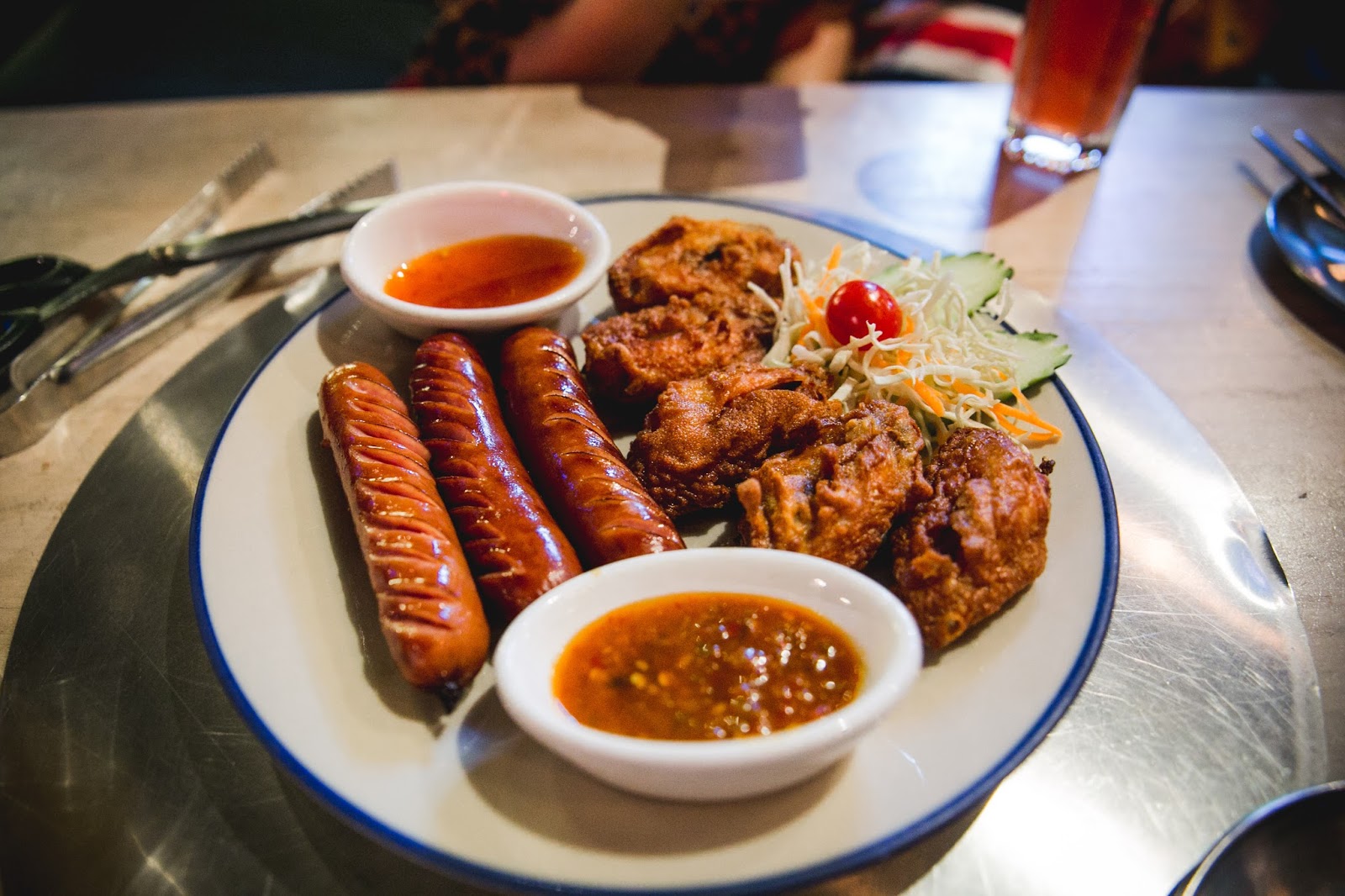 And finally, this is a special mention because we got lucky that  on the day we went to Common Ground, there was a beer festival happening. Penguin and I stayed for a bit, curious as we were to what that was all about. So we bought ourselves some coupon and tried out some of the beers on offer. Just choosing what beer to order had me going in circles. There was so much to choose from and I have to say that was the most difficult decision I had to make for the entire day. Really.

But prior to that, we also ate at one of the restaurants nestled on the the upper level of the trailer park. I don't recall the name but it served some decent Korean food, and that's where we had the bulgogi rice shown in the very first photo in this post. All I can say is Seoul has some pretty good-ass food no matter which area and what scale. Food haven indeed! 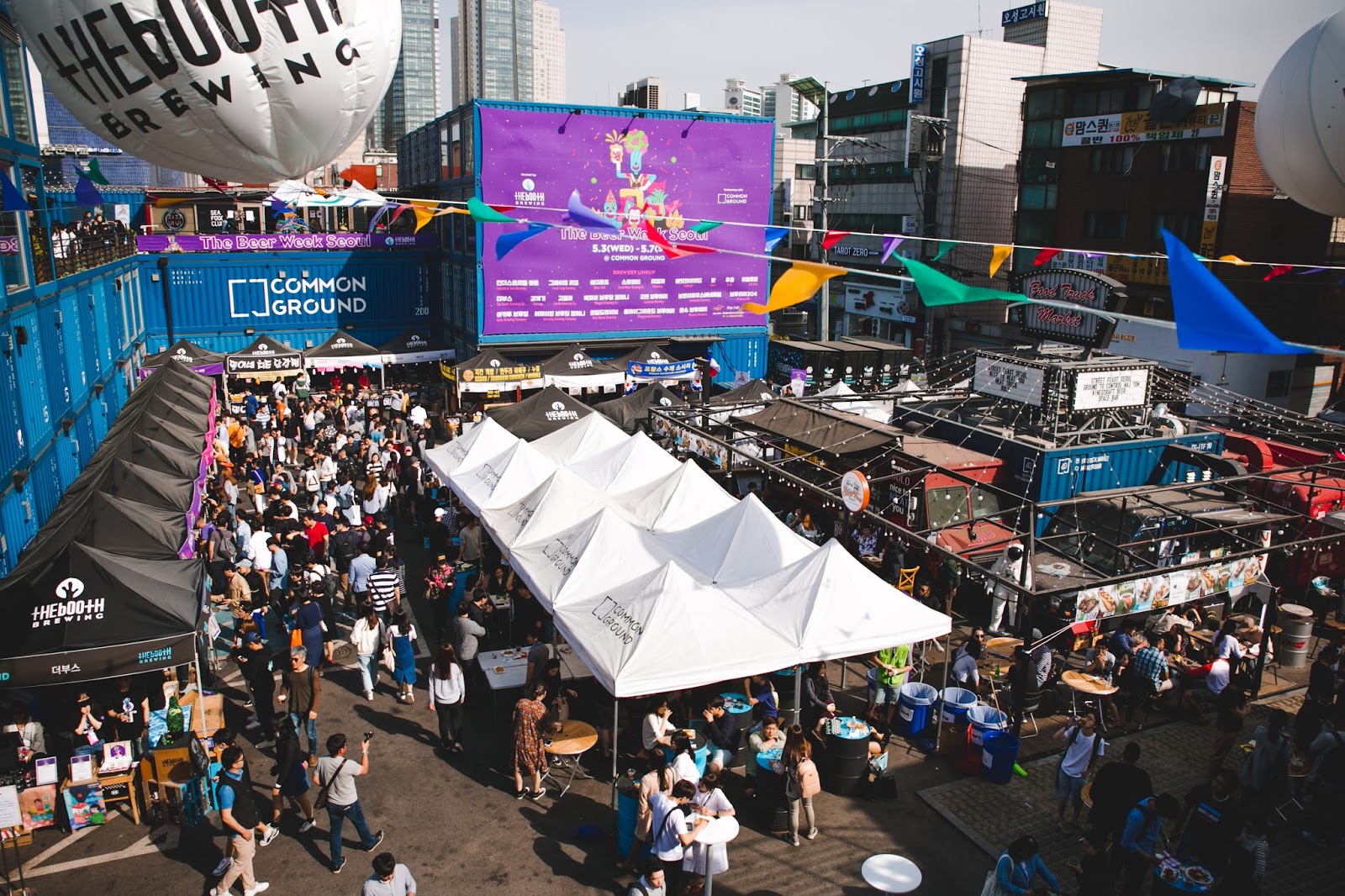 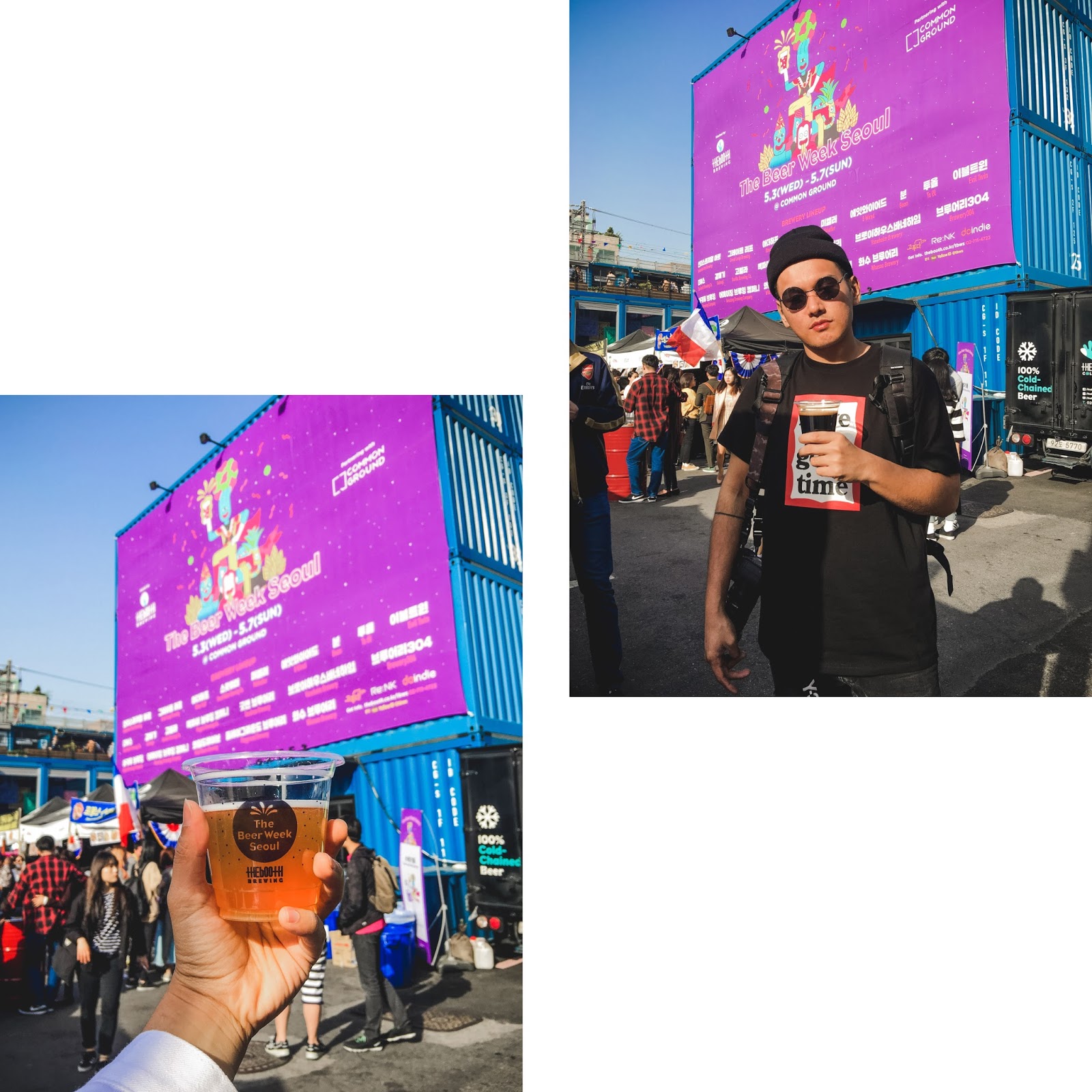 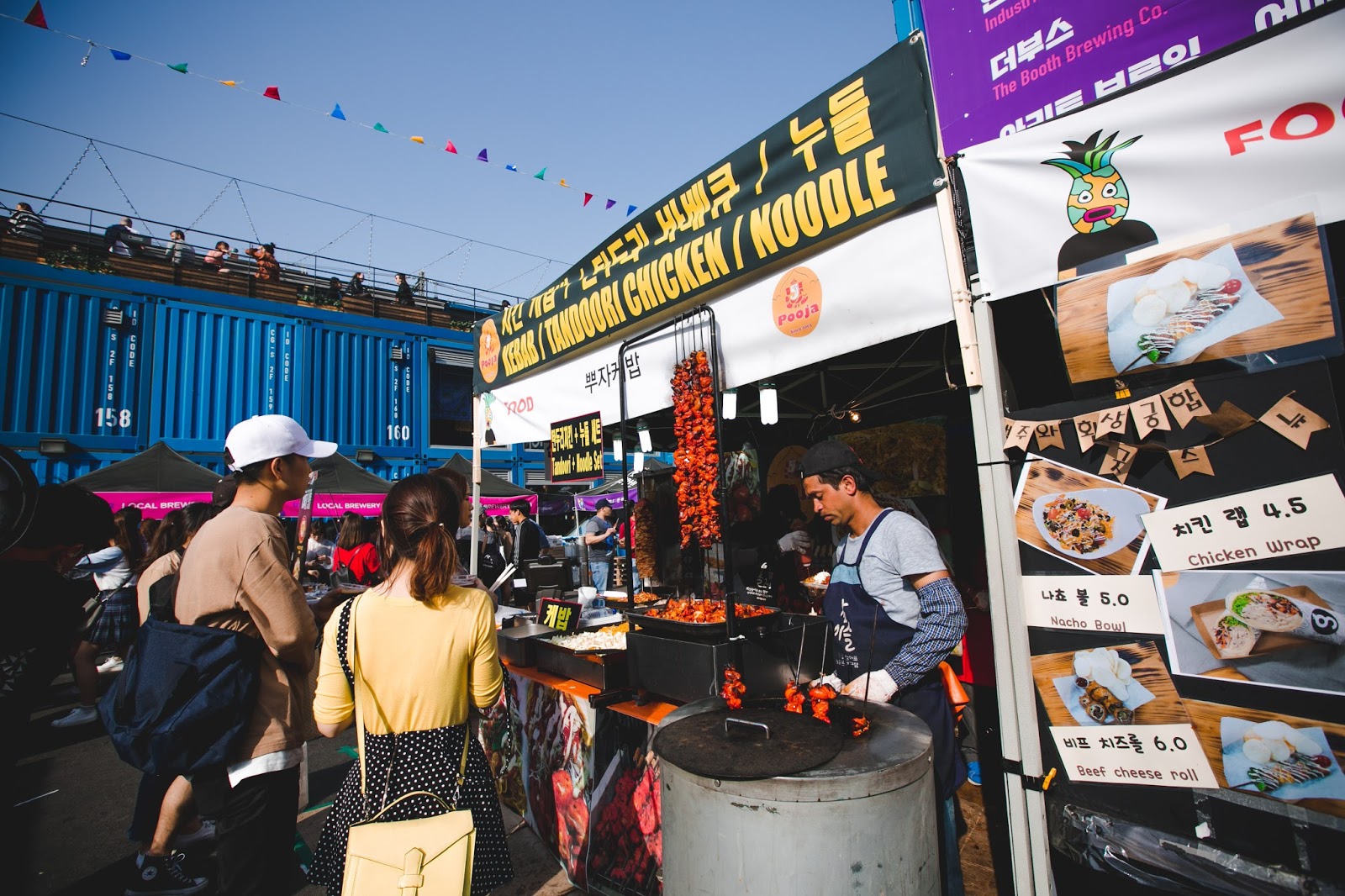 I hope this post made you guys hungry, it could only mean that Penguin and I did well, haha. Do let me know your thoughts or if you have any questions in case you too, are heading to Seoul and would want to know more about these places or the food, I'll try to give as much information as I can. But take note, I'm not a real "foodie", I just love food and I love eating so something good for my taste might not be for you. Just saying.