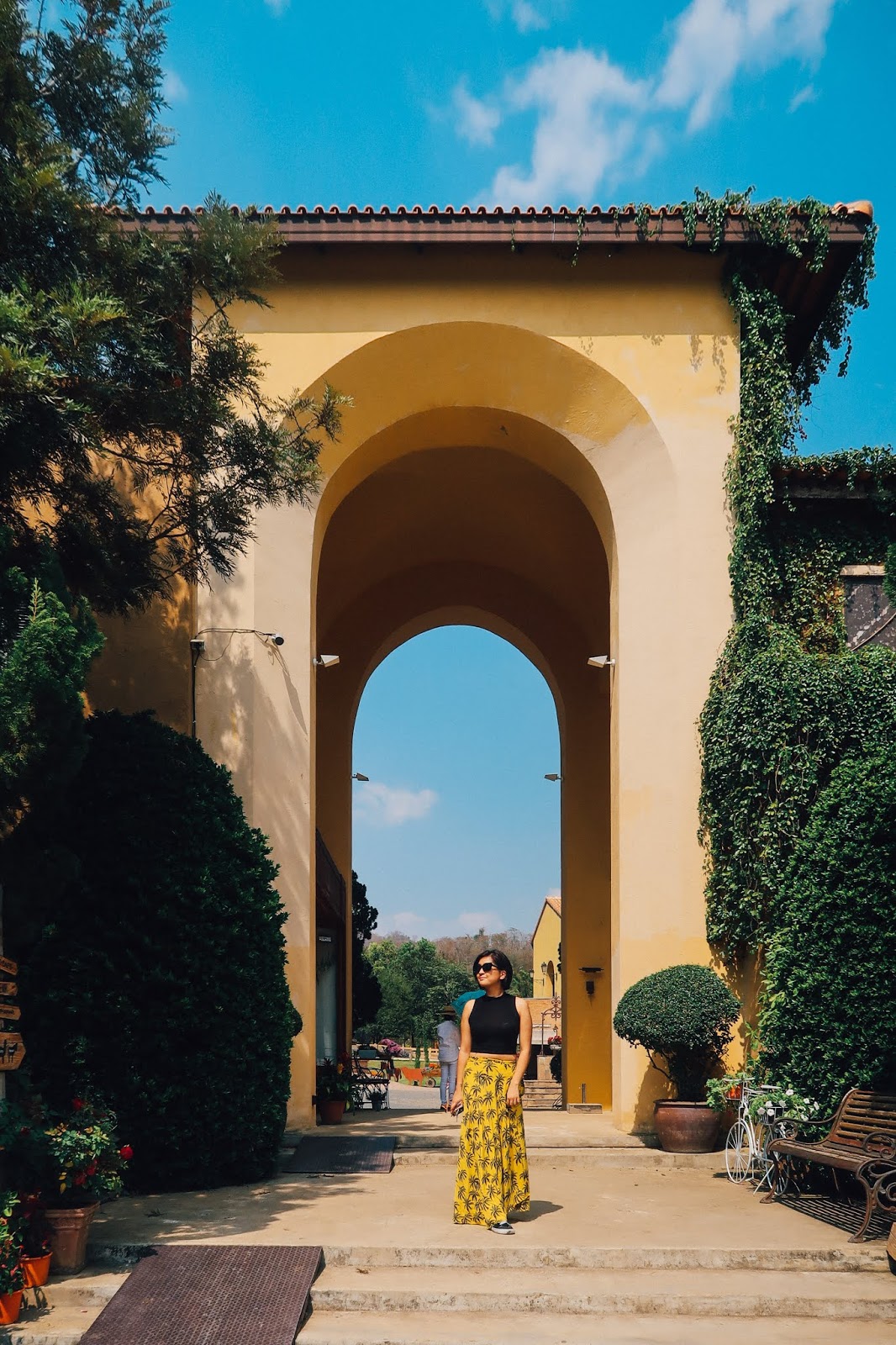 I've been meaning to share this post for a couple of days now but work and life's been in the way it kinda slipped my mind until today - ah, the weekend! Woke up early to do my house chores so I get the afternoon free. What shall I do for the rest of the day? I have yet to decide but here's this post once and for all.

If you've been following along on my Instagram (@misscarlaviolet), you'd know that I spent last weekend exploring this no so secret little gem in Thailand that is Khao Yai. It's a town outside of Bangkok approximately 3 hours drive with two of my newfound wander buddies - Fon and Pauleen.

Now, I looked up the place a couple of months ago when I recently just moved here and I was in awe of all the photos I saw on the Internet. There were these little villages that replicated parts of Europe, beautiful flower fields, parks, gardens, and farms surrounded by lush greeneries. Alas, I didn't know how to get there at the time, nor did I have the courage to go on my own by way of commuting (which would have been a total disaster knowing now that there was no way I could have gotten around Khao Yai without a car. Phew!). So anyway, fast forward to two weeks ago when my colleagues thought it would be a great idea to do a weekend overnight somewhere outside of Bangkok, I immediately jumped at the opportunity to suggest Khao Yai (and boy did I insist on it by doing so much research and knowing more than what locals would). To my appointment, they were convinced! So off we went, and boy was Khao Yai nothing short of what I expected. The only complain I do have, which is to be expected, the weather. It was so damn hot that I had headaches at the end of the day.

I do have to say that most of what we saw in Khao Yai are attractions purposely built for tourism purposes so when I say everything is so pretty, that's because they are designed to be. The social media inclined person in me is jumping with so much joy for every place we visited were Instagram-worthy. And since there are so much attractions to see in Khao Yai, we made a shortlist of the places that we really needed to see so that no time was wasted. 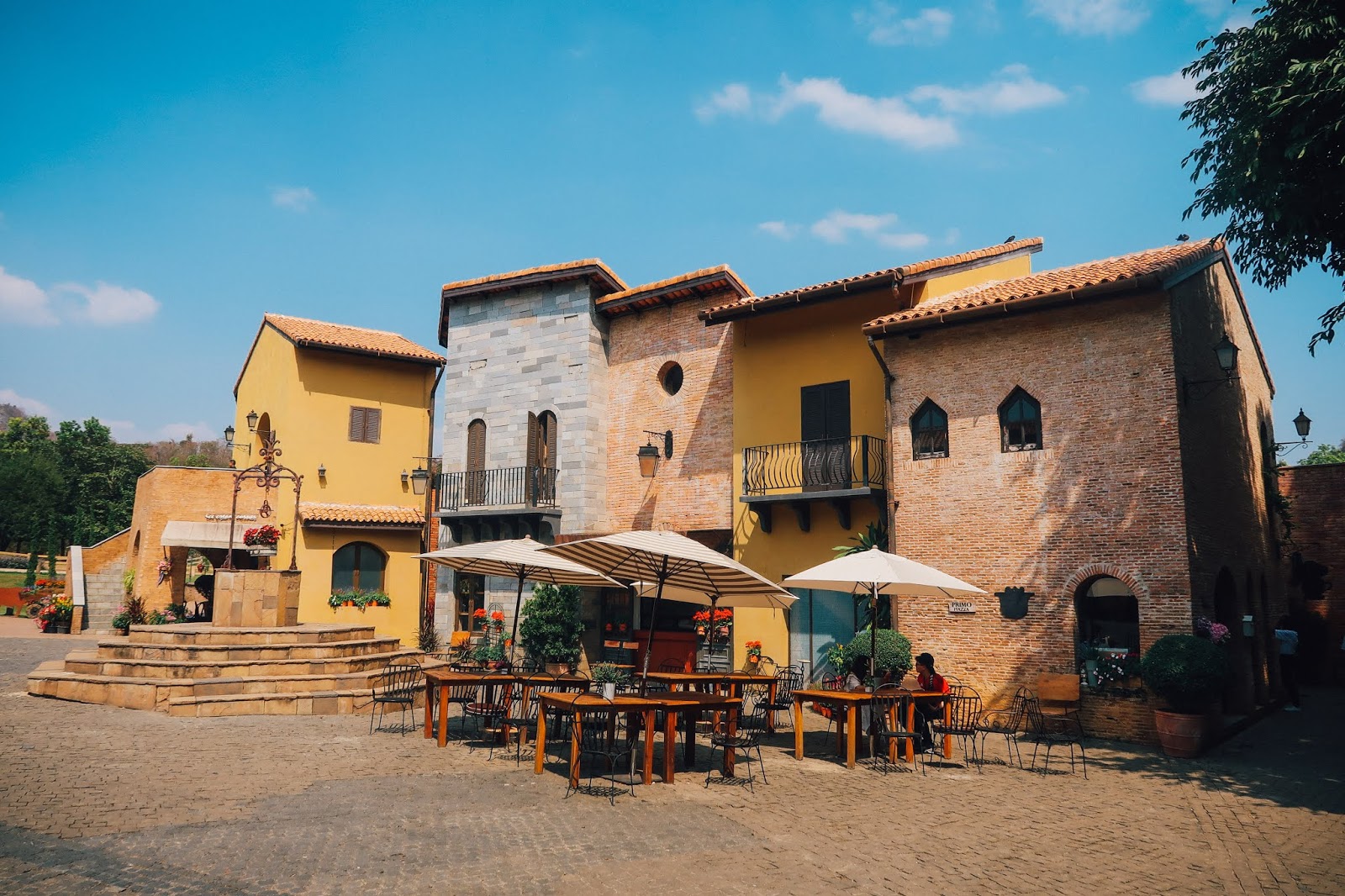 We started the drive out of Bangkok at around 8:30 in the morning and after a few pit stops for coffee and toilet breaks here and there, we reached Khao Yai at around noon - just in time for lunch. First on our list was the Birder's Lodge, which is essentially a local farmer's market that also happen to have a cafe. We were planning to have lunch there but realising that the place was packed (thanks to the market's popular Instagram status), having to wait for an hour to get our food put us off and we decided to just find a restaurant nearby where we could grab something quick. Fortunately in Khao Yai, there's plenty of cafes and restaurant to go around so it wasn't that hard to find one that's not so crowded. The downside is that you can't really tell the good, the bad, and the ugly. Still, we went for this place called Terano - an quiet little Italian restaurant where we ordered pasta, of course, and some salad. The food? Salty is all I can say but otherwise it wasn't so bad.

Post meal, we geared up for the beginning of our non-stop photo-taking exploration. Our first location was Primo Piazza. By the name, I guess you can already tell it's an Italian inspired village. There's an entrance fee you pay to get in which is THB 200 if you're a foreigner but I pass for being a local, which, unknown to many tourists, is that locals usually pay a cheaper price in any tourist spots in Thailand (yes, Bangkok included!). Accompanied by two Thais, I get to pretend like one and so only paid the discounted price of THB 100.

As expected, what you see inside is a replica of some little Italian village with outdoor cafes down to the little details as flower pots hanging on windows and doors. But the best part that I really liked about this place is the farm where you get to interact and feed alpacas, rams, and donkeys. I've never seen any of those animals in real life before so it's definitely one of firsts. 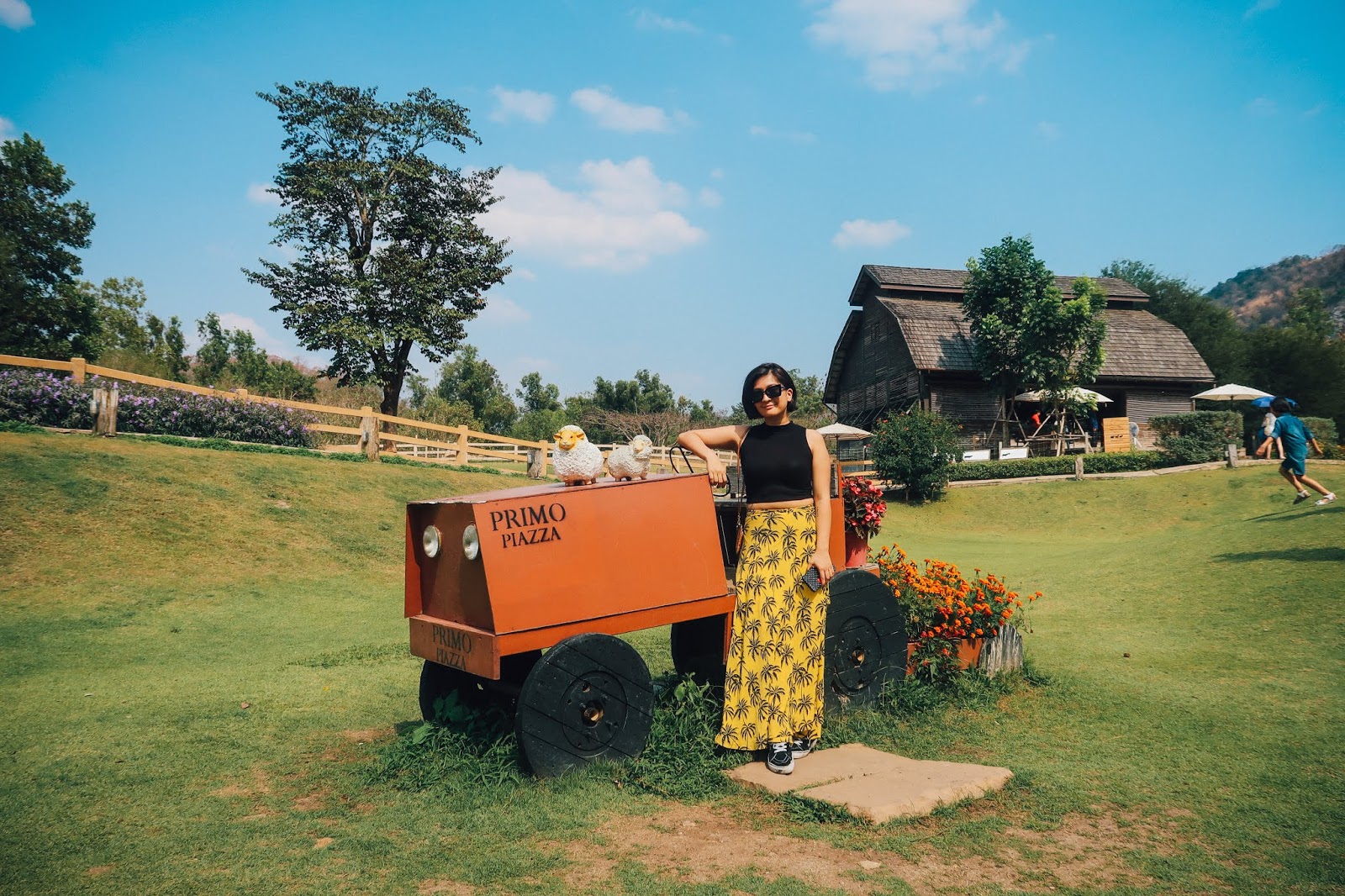 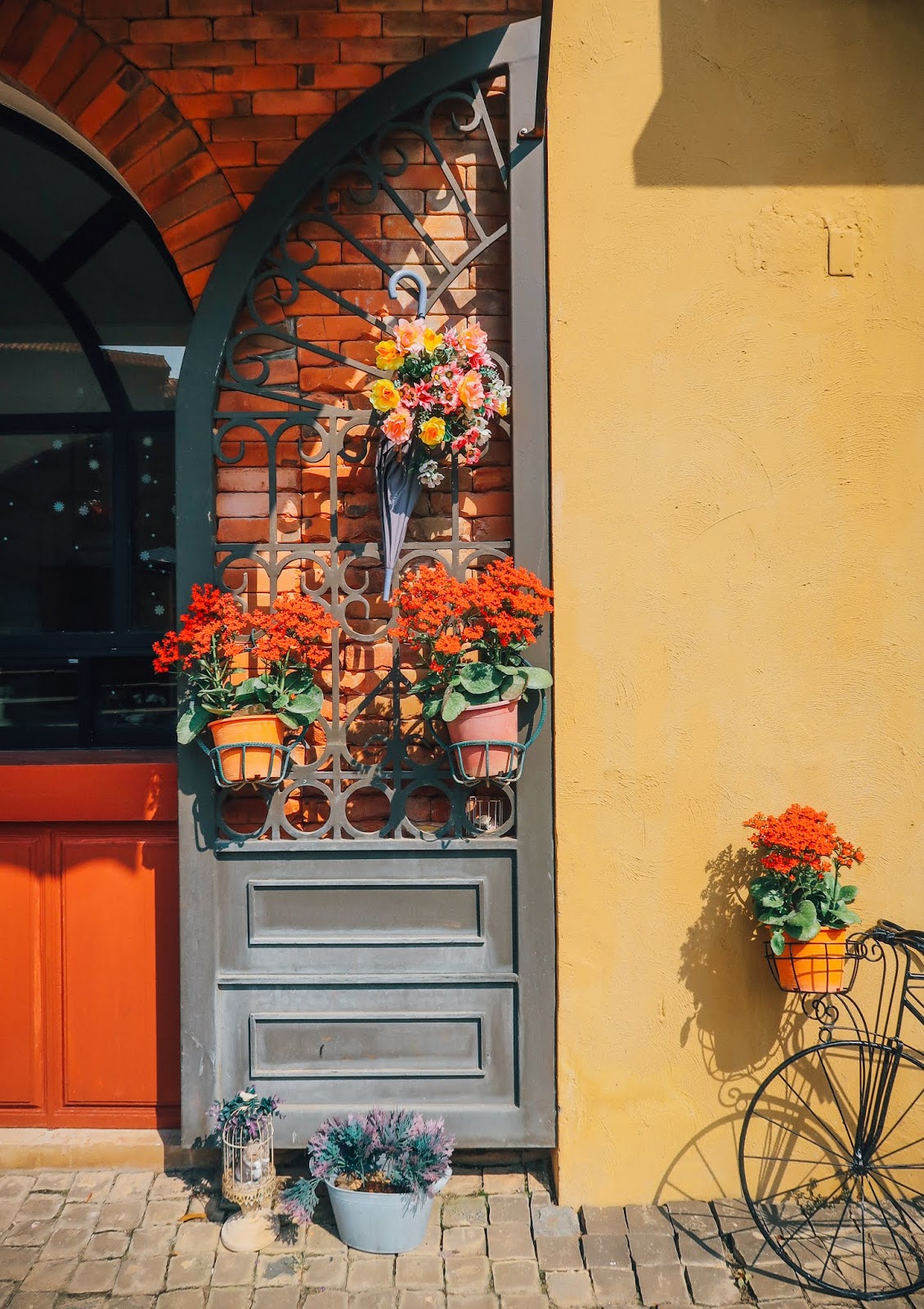 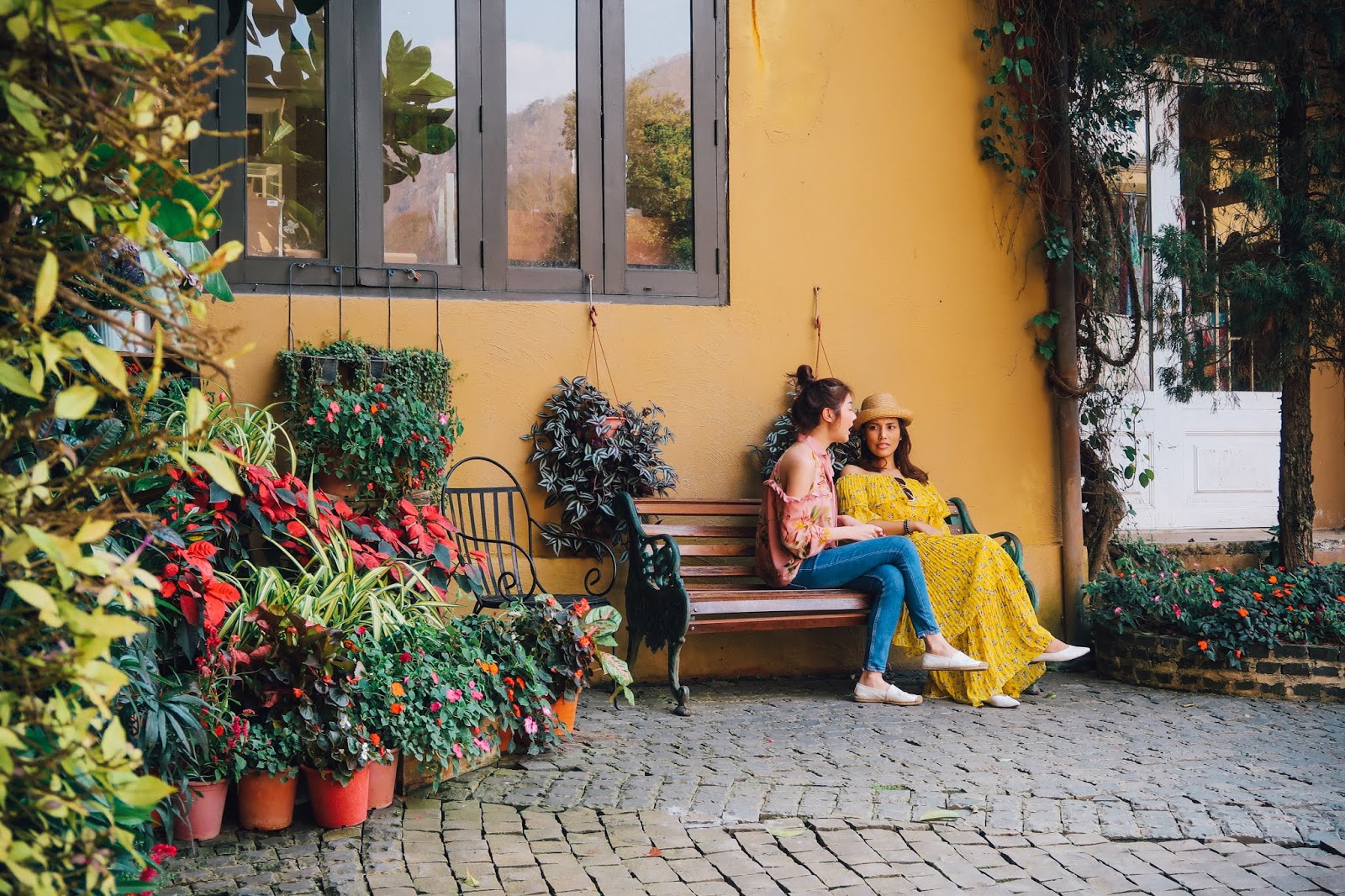 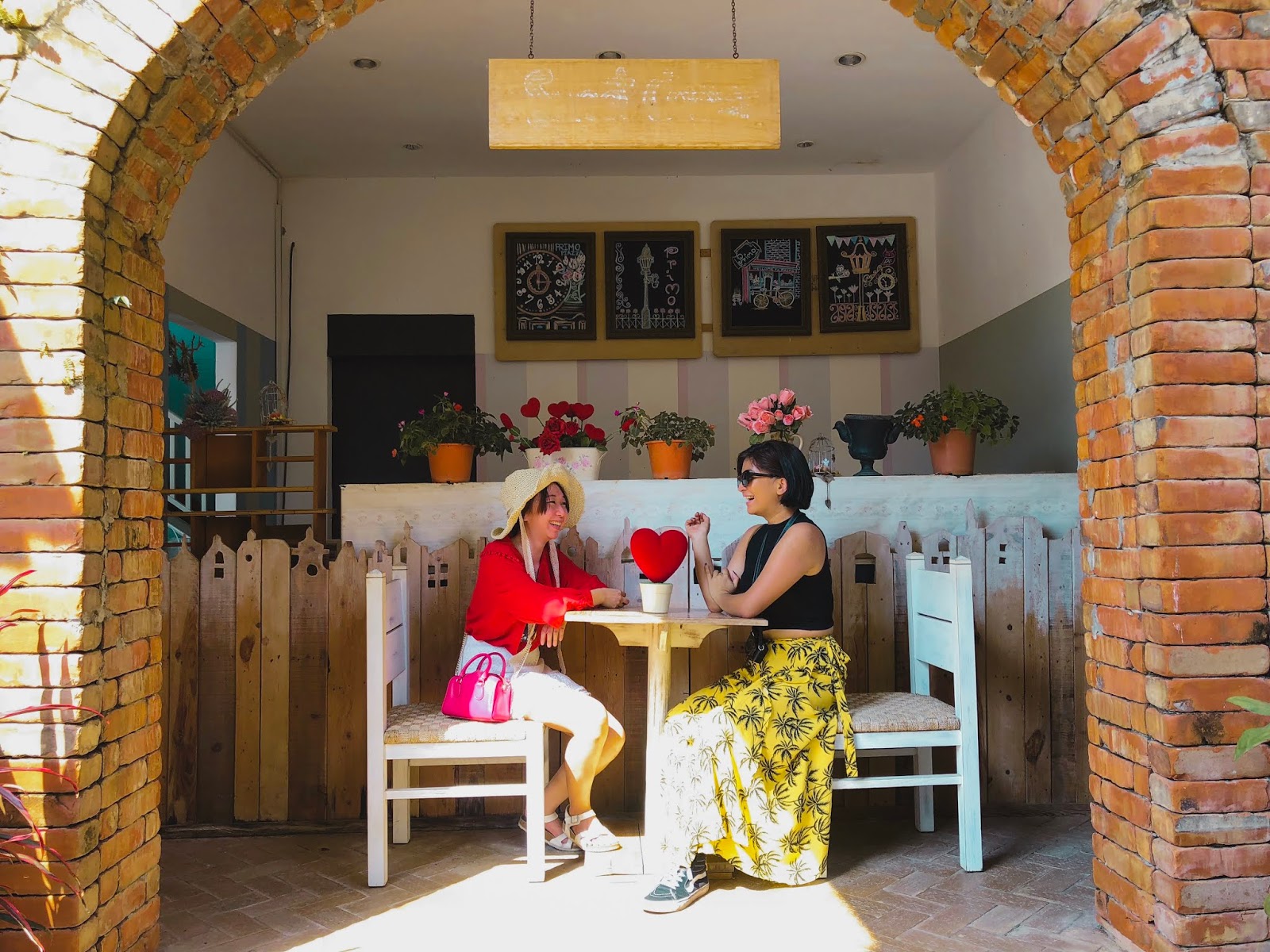 After an hour or so roaming around Piazza Primo, we were ready to move on to our next spot and essentially the main reason that I wanted to go to Khao Yai in the first place - the sunflower fields. Now, there are plenty of flower fields in Khao Yai, mind you. But they are, of course, seasonal attractions. We were a few weeks late from the peak of sunflower season that it proved rather difficult to find a farm that still had blooms. But I found one guy on Instagram who visited Khao Yai just a couple of days before we did, who claims to have found a farm that still had fully grown sunflowers at the time. I was so keen on going to the same farm that I shamelessly messaged the guy on IG. He was kind enough to pin the location for me because apparently, it was a local farm that not many people knew about and so it wasn't on google maps. Oh, my joy when we reached the farm and saw that the sunflowers were still there, even though they were, to be quite honest, already dying. They were sadflowers if you will. But hey, sadflowers are better that no flowers so we still went ahead.

I guess it was really that dead of season that there wasn't anyone in the farm, at all. Despite having a sign at the entrance saying something that entrance fee was THB 20, there wasn't anyone there in charge or supposedly collecting said fees. I guess you could say we trespassed?

So we go there and half the field was dead save for one lot. That's where we got creative with all these angles just to get some good shots. They don't look so much as sadflowers now, do they? I was content. But not so much as going without having to steal one. So I did. Oops. It made for a good photo prop and honestly, that's all I really wanted. 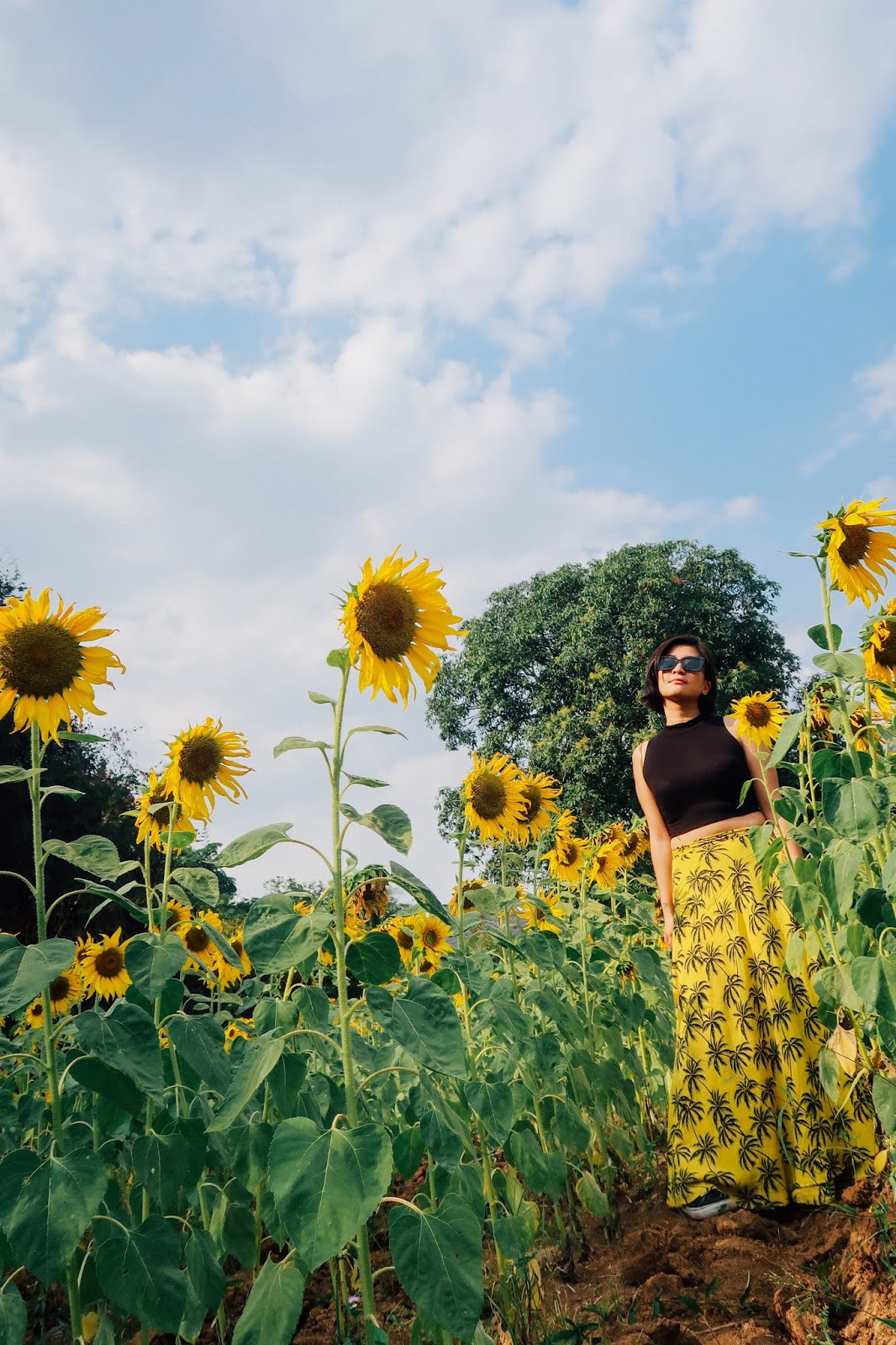 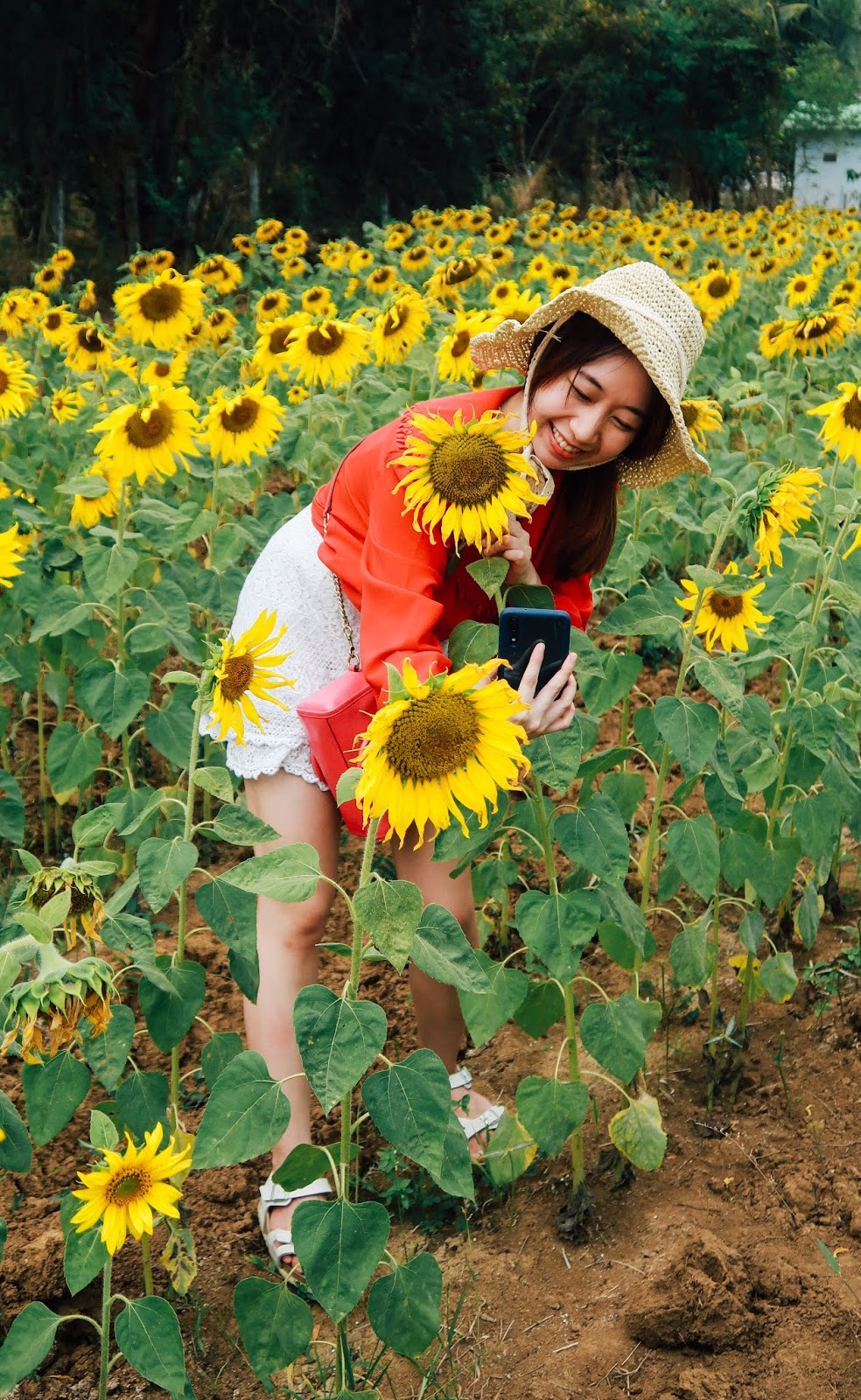 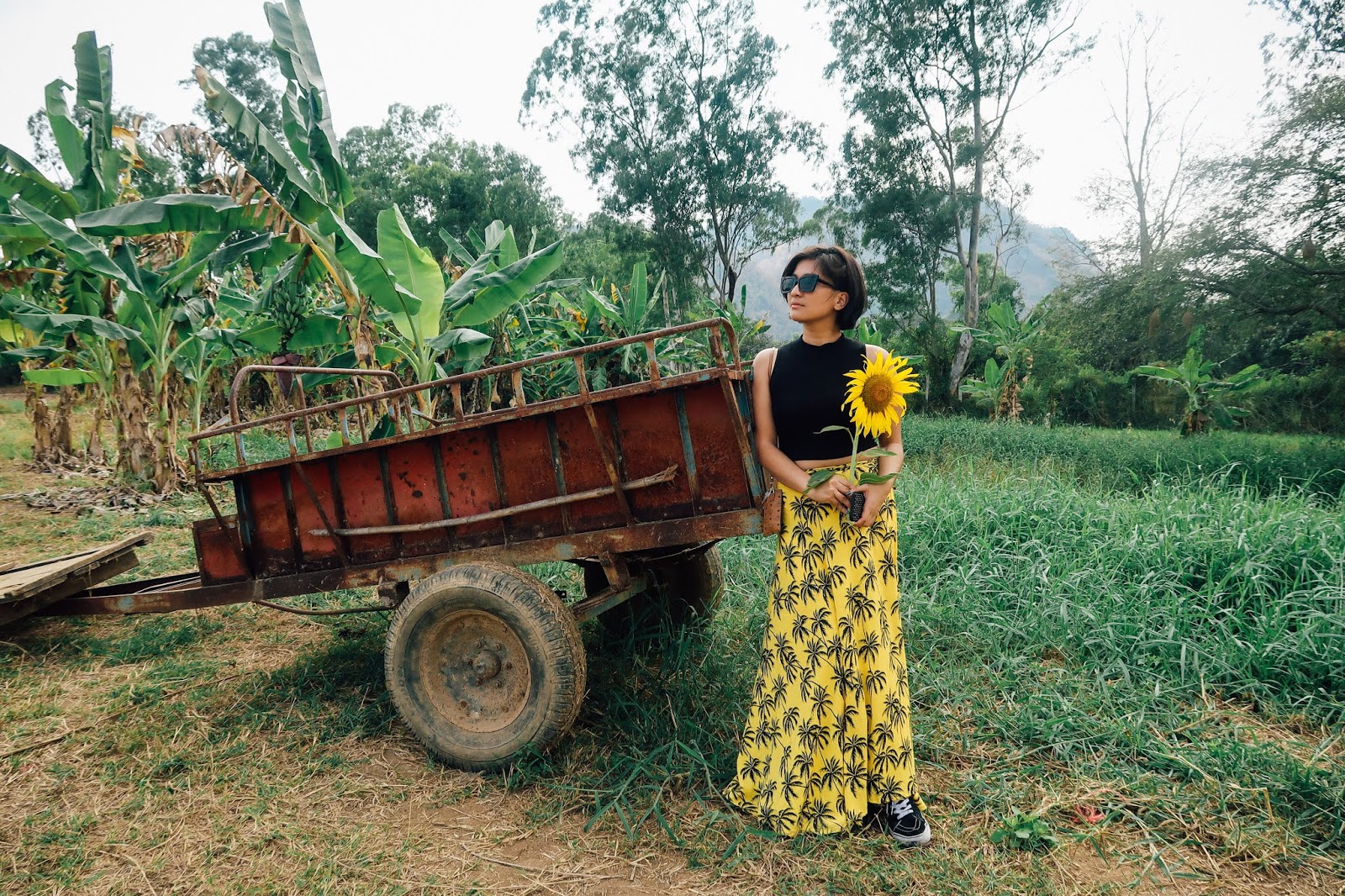 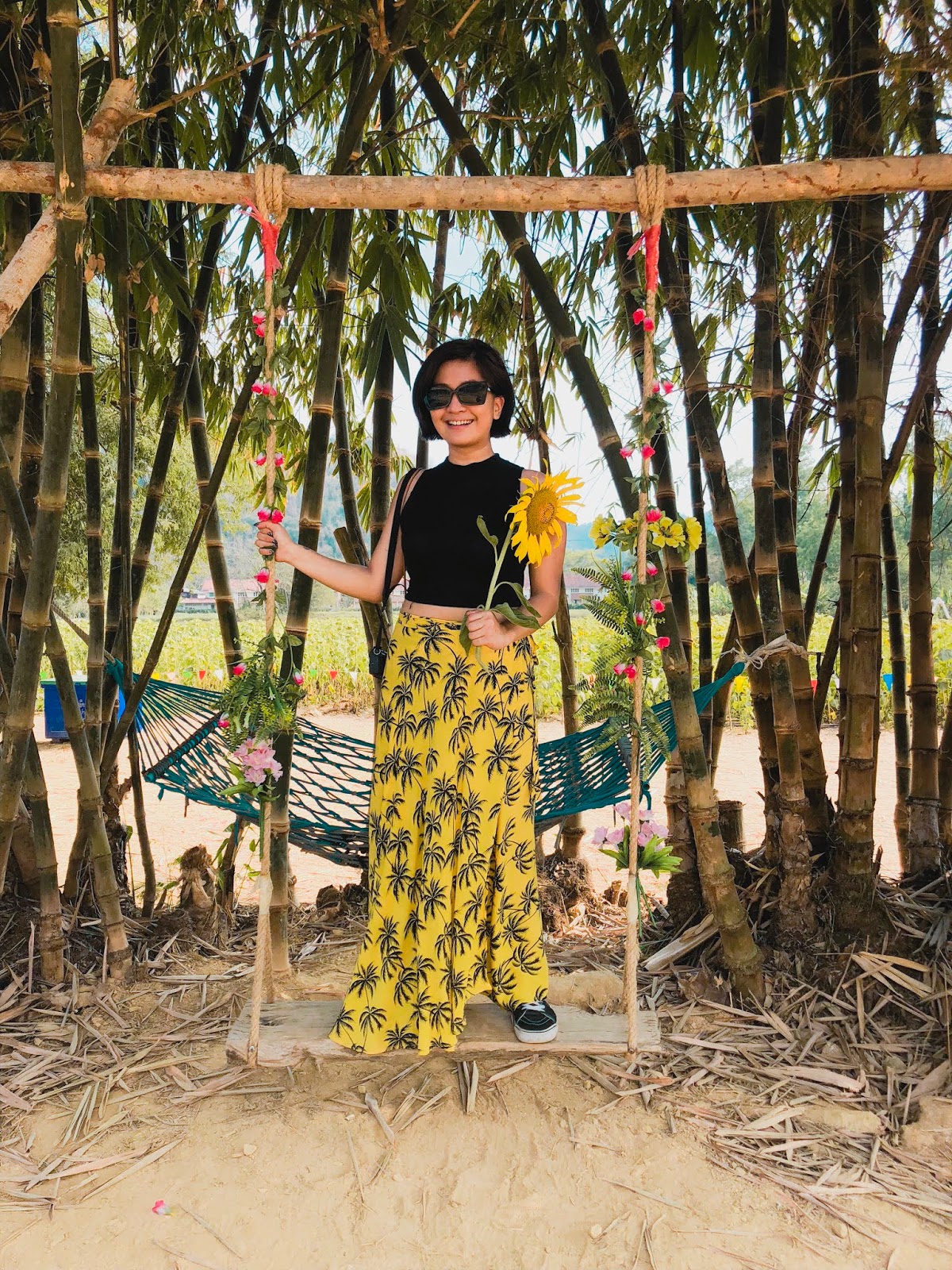 After the sunflower farm, it was time for a snack break and one our list for that is the Chocolate Factory. It's pretty much a one-and-all kind of place with a pastry-bakery shop, a cafe, and a restaurant. We were planning to buy takeaway souvenirs but decided to do it the following day for fear that whatever we bought would have melted in the car while we explored the rest of Khao Yai. Instead, we sat down for a much needed aircon break. We each ordered a refreshing drink and shared some chocolates and a cake. I did not take as much photos of our food as my outfit but I did film and included it in my VLOG so if you wanna see that, go on and watch the video at the end of this post or head to my youtube channel!

Once refreshed, we again went on our way to another spot. There's just one too many Italian-inspired villages in Khao Yai and where we headed next was one of them. It's called Palio, and a more popular one than the Piazza at that.

I saw why it was more popular upon getting there. There was no entrance fee, firstly. Secondly, the village was bigger than the Piazza. And lastly, there were much more things to do inside in terms of dining and shopping (though the animal farm in the Piazza still wins for me). The palm trees in Palio were gorgeous though, so much so that I was getting so much LA vibes, specially being that we were there nearing the golden hour. It was just a beautiful sight. 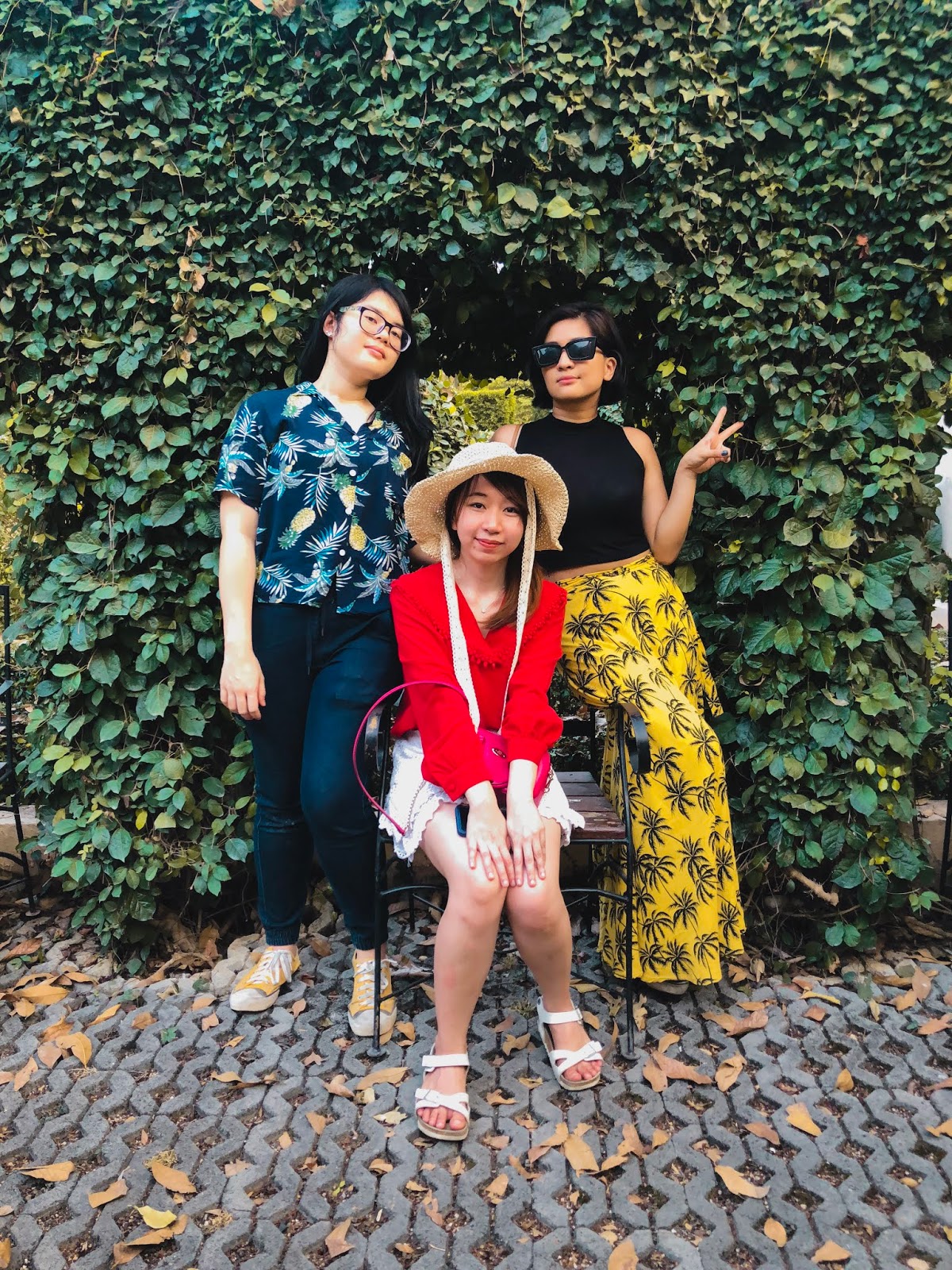 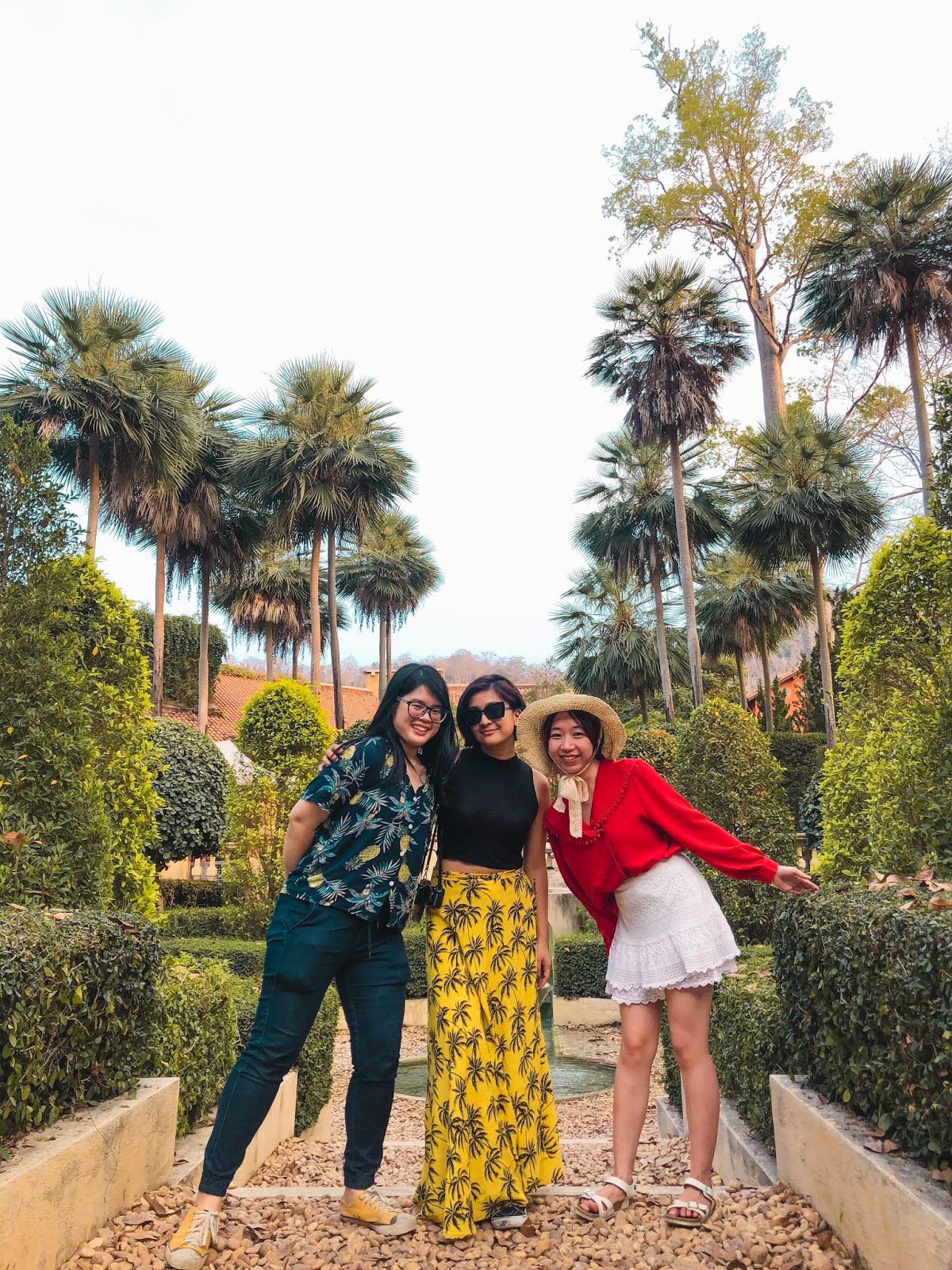 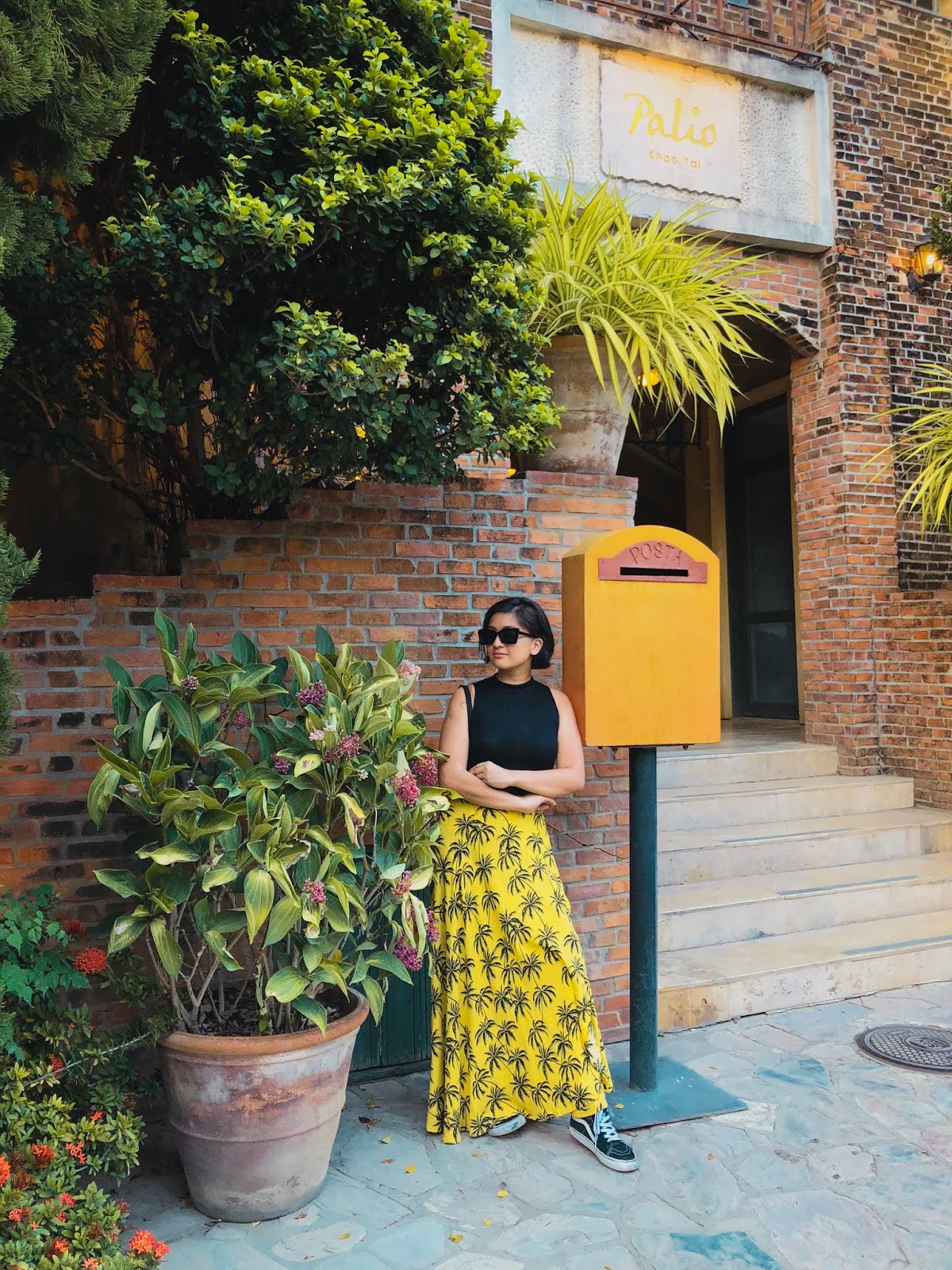 By the time we've rounded the little shops and alleys of Palio, it was getting dark and we were ready to retire to our hotel. We booked a one-night stay at this place called The Kids Adventure Resort, which by the name sounds a little sketchy. But it's legit and actually wasn't so bad. The fun part is that, and living up to its name, there were various games and activities that the resort offered complimentary for in-house guests. There were activities like archery, shooting; you could borrow bikes and ATVs to, come to think of it, I don't even know where; a mini zip line; a mini golf. You kind of get the picture so it short, it was indeed some kind of kids adventure place.

Again, I did not take much photos there but it's partially on the VLOG so go on and watch the video below.

There's a second part to this post and VLOG which will be up here soon enough but for now, I leave you with this set. Cheers to another great weekend!